Portlaoise hospital apologises for ‘failings’ over death of baby 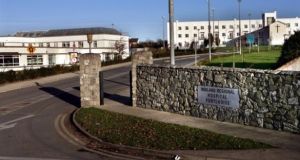 The Midlands Regional Hospital on Thursday apologised in the High Court to a couple whose baby son died at the Portlaoise hospital nine years ago. Photograph: Matt Kavanagh/The Irish Times

The Midlands Regional Hospital on Thursday apologised in the High Court to a couple whose baby son died at the Portlaoise hospital nine years ago.

It added: ” The hospital sincerely regrets the tragic consequences its failings have caused to you both and your family.”

Dylan Franks died in the operating theatre soon after his birth on March 6th, 2007.

The apology was read out in court as Dylan’s parents Aidan and Elsie Franks of Scart, Roscrea, Co Tipperary settled their action against the Health Service Executive (HSE) over the death of Dylan and also for nervous shock.

Oonagh McCrann SC told Mr Justice Kevin Cross in the High Court a number of opportunities were missed to deliver the baby and he should have been delivered earlier and members of the staff had indicated he was going to be delivered.

She said a huge distress for the family was when it was contended by HSE witnesses at the inquest in to the death of Dylan in 2009 that the cause of death was due to chronic utero placental insufficienty. Ms McCrann said Mrs Franks thought because she had smoked she was responsible.

Counsel said it was only after the Prime Time programmes on baby deaths at the Portlaoise hospital that the Franks began to ask questions and sought legal advice and commenced proceedings in February 2014.

The Franks had claimed there was a failure to follow through with the plan arrived at for the delivery of Dylan on February 10th 2007 and a failure to have regard to the clear evidence that Dylan was small.

It was also claimed there was a negligently concealing of the true facts and that Mrs Franks had negligently been allowed for seven years to feel that the reason for her baby’s death was placental insufficienty caused because of her smoking during pregnancy.

Liability was admitted in the case.

Approving the settlement Mr Justice Kevin Cross sympathised with the Franks on the loss of Dylan and and he said he hoped the settlement would give them some sort of closure.