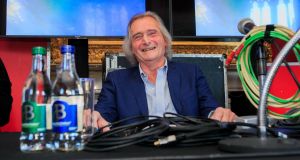 An off-duty Garda has sued Slane Castle owner Lord Henry Mountcharles (pictured) and MCD Productions over an injury she allegedly suffered in a fall at a Foo Fighters concert at the Co Meath venue in 2015. File photograph: Gareth Chaney/Collins.

An off-duty Garda who claims she broke her ankle after slipping on mucky ground while attending a concert at Slane Castle has sued for damages in the High Court.

Rachael Goggins said she went to see the Foo Fighters and was returning from the toilets when she felt her ankle “crunch” and she fell forward. She said she was wearing wellington boots and the ground was extremely mucky.

“I remember falling forward, the guy in front of me was disgusted with me. It felt like my ankle completely crunched,” she told Mr Justice Michael Hanna.

Ms Goggins (34), who is stationed in Dublin and from Co Meath, has sued MCD Productions, organiser of the concert, and Lord Henry Mountcharles, owner of Slane Castle.

Ms Goggins claims she was caused to fall on muddy and wet grass near the toilets area and food stalls. She alleges failure to install any, or any adequate, flooring or matting in circumstances where it was known the ground would become hazardous or a trap in the event of becoming sodden with water and cut up by significant quantities of pedestrian traffic.

It was further claimed there was failure to take sufficient steps to identify particularly hazardous areas, especially around the bar and toilet areas.

Ms Goggins says she was unable to leave her house for 10 days after the accident, had to have surgery on her ankle and had to use crutches for 11 weeks. She claims she missed out on job opportunities because of her injury and was unable to do overtime until December 2015. The claims are denied.

Opening the case, David McGrath SC, for Ms Goggins, said his client has been left with an 8cm scar on her ankle. Her case includes a claim for loss of earnings and overtime.

In evidence, Ms Goggins said she was helped to a first aid tent after she fell. When an ambulance had not arrived after three or four hours, she rang her sister who drove from Dublin to Slane.

She said the Garda public order unit got her out of the concert site in a van. She was out of work from the end of May to the beginning of September. She said she was overlooked for one position and missed out on a car course where she would have been next in line. Her ambition was to join the Garda Armed Response Unit, she said.