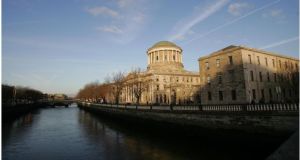 A man has sued his former secondary school in the High Court over a burn injury to his eye allegedly suffered when another schoolboy shone a laser beam in the classroom.

Dillon Breen said he has to wear glasses for life after a part of the retina of his right eye was burned in the 2012 incident at St Kevin’s College, Finglas, Dublin, when he was a Fifth Year student.

The other school boy did not mean to do something hurtful to him but had shone the laser pen beam in his right eye, he said.

“I was doing exam papers and focusing down. He shone it in my right eye. I felt a burning sensation immediately. I didn’t tell anybody, I didn’t want to be a rat on anybody,” he told Mr Justice Michael Hanna.

He said he later had headaches and went to hospital where he was told he had “melted part of my retina”. He said he had “perfect 20:20 vision” before the incident.

“Now, I have a tick in my vision of the centre of my right eye. It has taken ten per cent of my vision.”

The court heard that judgement had been obtained previously against Syncron Ltd in default of appearance.

Mr Breen has claimed the school caused pupils under their care to remain unsupervised; failed to notice in sufficient time or at all, or have any adequate regard, to the fact pupils had upon their person dangerous products which could cause harm to fellow pupils.

It is further claimed there was failure to forbid or properly warn pupils that products which were known or ought reasonably to have been known to be in circulation and dangerous were not to be brought upon school property.

He has also alleged failure to supervise or otherwise control the school environment and its pupils in a safe and effective manner to so as to ensure no injury would be caused to Mr Breen.

In evidence, Mr Breen said the incident happened when the teacher was away from the classroom and had asked the students to fill in exam questions.

He said he was aware another student had brought a laser pen, which had cost about ten euro, into the school, as it had been shone on walls in classrooms.

Crossexamined by Finbarr Fox SC, for the school, Mr Breen agreed, when the teacher returned to the classroom, he had not directly said to the teacher what had happened. He said his mother later brought it to the principal’s attention.

In evidence, Martina Breen, the plaintiff’s mother, said her son never had any problems with his eyes before the accident. She said he had come home from school on the day in question with a headache and went to bed.

When he got up, it was still sore and he was brought to hospital.

On the way home from hospital, she had called into the school and told them what had happened, she said. There was no follow up from the school and she was never contacted about the incident, she said.

The case before Mr Justice Michael Hanna continues on Thursday.