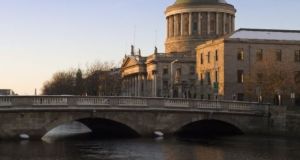 A man who disputed his estranged wife’s claim of fear of being attacked by him, saying she was “well able to look after herself” having had martial arts training, has lost his High Court appeal aimed at overturning an interim barring order.

Mr Justice Max Barrett said there were substantive reasons to favour the woman’s evidence over the man’s, including her evidence of a pattern of emotional abuse, threats, and intimidating and abusive behaviour which she suffered until it became too much and she contacted Women’s Aid and sought protection and barring orders.

Having observed the woman, it seemed she had experienced “very real” fear at times in her dealings with the man.

In her application for the barring order, she came across as a fearful woman “at her wits’ end” in terms of dealing with his impossible and intimidating behaviour and “the constant threat of imminent harm”.

While the man repeatedly indicated her various allegations were untrue, she holds down a responsible job and her demeanour and evidence buttressed the court’s sense she was telling the truth “and a sorry truth it was”.

Noting the man’s martial arts claims, the judge said the woman obtained a Red Belt qualification as a teenager but, even if she had the highest ability in martial arts and/or boxing, such a line of argument was “wrong and objectionable”.

Domestic violence, and the threat of domestic violence even where no actual violence ensued, “is always unacceptable. There are no ‘ifs’ or ‘buts’ in this regard, no exceptions, no mitigating circumstance.”

There was abundant evidence to support the making in late 2019 of the interim barring order under section 8 of the Domestic Violence Act 2018 and no legal reason for it to be set aside, he held.

The words “immediate” and “significant”, in the context of the purpose of the Act, must be given respectively the widest and narrowest possible readings. The Act’s purpose was not just to address domestic violence but also eliminate what the Oireachtas clearly perceived as a “pernicious evil”.

The word harm should also be given the widest possible reading to embrace evil (physical or otherwise), hurt, injury, damage or mischief.

The nature of the harm perceived here was psychological abuse and/or unusual behaviour which had the woman afraid, following a couple of what she perceived to be near moments of danger, a flare-up was imminent in which she might be attacked.

He did not accept the man’s claims of being the victim of “a web of lies and machinations” or that the woman wanted him out of the house so her “new love” can move in. The court considered “less than appropriate” the man’s emphasis on the new love being another woman “as though this somehow matters”.

Earlier, the judge noted the background included the woman claimed the man had behaved in a bullying and aggressive manner towards her for some time and their marriage had broken down by the end of 2016.

They told their children the following year they intended to separate and the woman claimed, after an unsuccessful mediation in early 2018, the man’s behaviour deteriorated to the extent she was in fear for her own and the children’s safety.

She described the home atmosphere as “toxic”, claimed he shunned her efforts to agree an orderly schedule regarding the children and, by summer 2019, she was subject to threatening and abusive tirades from him on an almost daily basis.

His behaviours included shouting at and threatening her, telling her to “be careful” and she would get her “comeuppance”, walking circuits around her, silently staring at her and sitting on the stairs outside her bedroom, it was claimed.

Mr Justice Barrett noted, since the interim barring order was made, the man had “troublingly” taken to parking his car in such a way as to stop the woman driving out her driveway. He did not accept the man’s explanation he was parking that way to avoid parking in a puddle and reminded him the order bars him from putting the woman in fear by attending at or near her residence.

Scheme aims to provide free legal services to those in need 06:50
Colleges must report annual bullying and sexual harassment figures 06:47
Majority of Covid-19 outbreaks in last week were in private houses 06:20
Science explains why your diet plan may not be working for you 06:00
Brown dwarf stars: What’s the weather like up there? 03:00