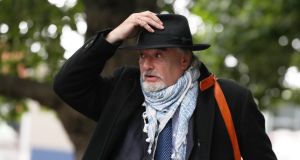 Lawyers for the State have told the High Court that “in a bizarre way” Ireland has become a “safe haven” for Ian Bailey, who is facing a 25-year prison sentence in France for the murder of filmmaker Sophie Toscan du Plantier.

Counsel for the Minister for Justice, Mr Robert Barron SC on Friday told the High Court that the family of Ms du Plantier feel they have not achieved justice.

Mr Barron also said the court had a “prima facie” obligation to surrender Mr Bailey and there was a strong public interest in surrendering the Englishman, who has been suspected for 24 years of killing the mother-of-one. He said there was a risk of losing sight of this.

This is the third time French authorities are seeking Mr Bailey’s surrender in relation to the death of Ms du Plantier, whose badly beaten body was found outside her holiday home in Schull in December 1996.

The former journalist (63), of The Prairie, Liscaha, Schull, west Cork, was convicted of the French woman’s murder in his absence in a Paris court in May 2019. The three-judge Cour d’Assises (criminal trial court) in Paris accordingly imposed a 25-year prison sentence on Mr Bailey in his absence. Mr Bailey, who denies any involvement in Ms du Plantier’s death, did not attend the French court and had no legal representation in the proceedings, which he has described as a “farce”.

In his sworn affidavit, Mr Bailey said he had nothing to do with the murder of Ms du Plantier. He said that whilst he has not been the subject of criminal court proceedings in Ireland, he has been subject to the criminal process and his standing had suffered greatly in the small rural community where he lives. He tries not to dwell “on being hunted” and writing poetry has had a cathartic effect on him, he said.

On the final day of the extradition hearing, Counsel for the State, Mr Barron, said Mr Bailey had said in his affidavit that the effect of the EAW against him meant he was effectively confined to Ireland and could not leave the jurisdiction.

Mr Barron said the reason the respondent could not go to his mother’s funeral in May 2013 in the UK was because French authorities were looking for his surrender. “Ireland has become a safe haven for Mr Bailey in a bizarre way because he cannot travel anywhere outside the European Union for risk of being arrested,” he said, adding that the former journalist had chosen not to surrender himself to French authorities. He added that the family of Ms du Plantier felt they have not achieved justice.

In a sworn affidavit opened to the High Court on Wednesday, Mr Bailey said he had been greatly restrained and unable to travel freely since the issuing of the EAW in 2010. He explained in the affidavit that he was unable to visit his mother in a nursing home in the UK or attend her funeral, something he said “had been one of the cruelest aspects of this entire process”.

The judge presiding over the extradition hearing Mr Justice Paul Burns interjected at this point and said that he interpreted this as meaning that Mr Bailey would be arrested if he left Ireland and would have to go through another process of being extradited.

Furthermore, Mr Barron said that the Irish High Court does not know what evidence would be available to the French authorities in the case of a retrial for Mr Bailey in France and what issues would likely arise. “It is impossible to make a judgement of fair procedures until we actually know who turns up for the trial. We are completely in the dark,” he submitted. He asked how could the High Court decide if it would be a fair trial, when one knows nothing concerning what the retrial would be about.

Mr Barron said the decision from the trial in Mr Bailey’s absence in the Paris court last year should not be parsed and analysed. They had applied their rule of procedure and ended up with a result, he said. The lawyer submitted that one does not know what the investigative procedure was nor the steps taken.

In summary, Mr Barron argued that there is a “prima facie” obligation to execute the EAW and surrender Mr Bailey to France. Ms du Plantier was killed and there is a strong public interest in Mr Bailey’s surrender and one runs the risk of losing sight of this, he added.

The barrister submitted that Mr Bailey has been suspected of the killing of Ms du Plantier for 24 years, has been the subject of an investigation by gardai, his suspected involvement has been considered by the DPP and he was twice arrested for the purpose of the consideration of the execution of the EAW.

These are important and weighty considerations to be taken into account, he noted. As sad and tragic as this case is, it has been determined in accordance with the law of the land and prohibition to surrender had not been established, he concluded.

In reply, Ronan Munro SC, for Mr Bailey, said the absence of an appeal by the State from the High Court’s decision not to extradite his client to France in 2017 and their conduct in response to the judgement was “extremely important”. Counsel said Mr Barron was a party to the High Court case and he now claimed the judge got it all wrong on the issue of abuse of process. Mr Munro said it was “perfectly open” to the State to appeal the 2017 High Court decision and having not done that created “an issue of estoppel” [a legal principle that prevents someone from arguing something or asserting a right that contradicts what they previously said or agreed to by law].

Mr Munro said Mr Barron had suggested referring the issue to Europe but the lawyer argued that further proceedings after 23 years would be “verging on persecution”.

French authorities previously sought the surrender of Mr Bailey in 2010 but this application was refused by the Supreme Court in 2012, which held that section 44 of the European Arrest Warrant Act 2003 prohibited surrender because the alleged offence was committed outside French territory and Irish law did not allow prosecution for the same offence when committed outside its territory by a non-Irish citizen. Mr Bailey is a British citizen.

A second French extradition request in respect of Mr Bailey was dismissed as an “abuse of process” by the High Court in July 2017. On that occasion, Mr Justice Tony Hunt held that the “unique features” of the case justified “termination” of the proceedings. He said the Minister was “estopped” or halted from obtaining an order for Mr Bailey’s surrender in light of the Supreme Court’s judgement in 2012 on identical relevant facts.

Mr Bailey was present in court for Friday’s hearing. Filmmaker Jim Sheridan had also attended each day of the hearing.

Following the parties’ submissions, Mr Justice Burns said some very important and difficult issues had arisen, which he wanted to give full consideration to and if he came to the conclusion that he needed additional information he would recall both sides. The judge reserved judgment and said he would deliver it on October 12th at 2pm.

Mr Bailey was remanded on continuing bail until that date.