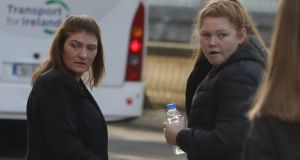 A 14-year-old girl who claimed she suffered a severe shoulder injury at birth has settled her High Court action for €425,000.

Amy Hutchinson has difficulty riding a bicycle and a problem carrying her schoolbag as a result of the injury to her right shoulder and arm, the court was told.

Ms Hutchinson, Mullaharlin Park, Dundalk, Co Louth, had, through her mother Amanda Hutchinson, sued the HSE over the injury including Erb’s Palsy allegedly sustained during her delivery at the Our Lady of Lourdes Hospital, Drogheda, Co Louth, on July 19th, 2004.

It was claimed there was failure to manage Ms Hutchinson’s pregnancy properly and to foresee the risks of shoulder dystocia. She further claimed, once shoulder dystocia had been suspected or diagnosed, there was a failure to seek assistance by summoning the most experienced obstetrician available.

It was further claimed there was a failure to deliver the baby by Caesarean section. The claims were denied.

Counsel told the court the girl does well and manages on her own mostly but no longer plays sports. Approving the settlement, Mr Justice Kevin Cross said it was a good one and he wished Amy and her family well for the future.