Jury, in a majority verdict, found article on visit by Criminal Assets Bureau to his Dublin office defamed him 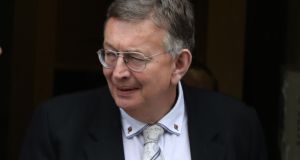 A High Court jury, in a majority verdict, has awarded €160,000 damages to solicitor Gerald Kean after finding he was defamed in a newspaper article concerning a visit by members of the Criminal Assets Bureau (CAB) to his Dublin office.

He will also get his costs from the eight day case.

A majority of at least nine found the March 11th 2016 article in the Irish Daily Star meant Mr Kean was subject of a probe by CAB into the criminal activities of the Hutch/Kinahan gang following the Regency Hotel shootings.

A majority could not agree on whether the article meant Mr Kean was suspected by CAB of being associated with gangland crime and of facilitating criminal activity in his profession as a solicitor.

A majority also found, in the circumstances of the case, the manner and extent of publication was more than was “reasonably sufficient”; the article was not published in the course of, or for the purpose of, the discussion of a subject of public interest, the discussion of which was for the public benefit; and it was not “fair and reasonable” to publish it.

Mr Kean was in court with his brother, senior counsel Richard Kean, and a friend when the verdict was announced just after 2pm on Friday.

An application for a stay on the damages order will be heard by Mr Justice Bernard Barton next Wednesday when he will also hear submissions concerning whether the article breached Mr Kean’s privacy. That issue is not for a jury to decide.

After the verdict, Mr Kean said he was “very pleased” with the verdict.

“It was not a case I took lightly, it was very upsetting for me. I felt I was left with no alternative, I’m delighted with the outcome.”

He also thanked his lawyers, senior counsel Jim O’Callaghan and Paul O’Higgins, solicitor Simon McAleese, his family and friends and the “thousands of well wishers” who had contacted him.

Mr Kean sued over an article published in the Irish Daily Star on March 11th 2016, headlined ‘Kean Caught Up in CAB probe.’

It concerned a visit by CAB officers on March 9th 2016 to the solicitor’s offices at Upper Pembroke Street, Dublin, with a view to getting a conveyancing file relating to the purchase in 2015 of a house at Kildare Road, Crumlin by a client of the firm, Seán McGovern, whom CAB suspected of involvement with the Kinahan crime gang.

CAB had secured warrants from the District Court to search 18 premises, including Mr Kean’s, on March 9th 2016 as part of its long-running investigation into the assets of the Kinahan gang.

The file was provided to the CAB officers by Mr Kean’s office and a senior CAB officer told the court it ultimately lead to Mr McGovern’s house being forfeit to the state as having been purchased with the proceeds of crime.

Mr Kean said he was distressed and “shell-shocked” by the article and claimed it wrongly meant he was linked to gangland crime and had damaged him personally and professionally.

Independent Star Ltd denied the article bore the meanings alleged and denied defamation. It also pleaded a defence under Section 26 of the Defamation Act to the effect of fair and reasonable publication for purpose of discussion of a matter of public interest in the public benefit.

The newspaper’s Crime Correspondent Michael O’Toole, who wrote the article, said it was fair, reasonable and accurate and he did not consider it was “sensationalised”.

His view was that there was, and is, a public interest in revealing that Mr Kean, a “significant” public figure, had been caught up in the CAB operation, he said.

The jury of five women and seven men went out to consider their verdict about 3.40pm on Thursday after they were instructed on the applicable law by Mr Justice Barton. They were sent home about 6.45pm and returned to court to resume deliberations at 10am on Friday.

At 11.10 am, the foreman told the judge they could not reach a unanimous verdict, more time would not assist them in doing so and they wanted guidance on their options.

Mr Justice Barton told the jury it was open to them to reach a majority verdict on which at least nine of them must agree. The same nine must agree on the answers to each aspect of the questions, he also said. The jury resumed their deliberations and returned at 2pm with their verdict.