Family ‘evicted’ while on school run return to Cork home 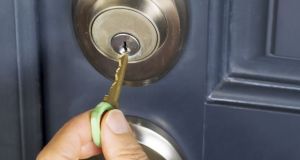 A family who returned from a school run to find that their rented home of six years was purportedly rented to another man are back in the property pending the outcome of a dispute over their tenancy.

A family who returned from a school run to find their rented home of six years had been purportedly rented to another man are back in the property, pending the resolution of a dispute over their tenancy, the High Court has heard.

Catherine Hadley secured a High Court injunction two weeks ago after she found Patrick Lynch had moved into the four bedroom house on 12 acres at Kilbeg, Leap, Glandore, Co Cork, she shares with her fiancé James Brain and their two young children.

She said Mr Lynch told her he was the new tenant and showed her a purported residential agreement with the property owner Bartholomew, aka Sonny, Whelton.

The family, represented by Eanna Mulloy SC, with Tim Dixon BL, got orders from Ms Justice Caroline Costello restraining trespass on the property by Mr Lynch and Mr Whelton.

The matter returned before the High Court on Tuesday when Mr Mulloy said the family were back in the property, the status quo has been maintained, and the defendants had consented to orders being put in place pending the final outcome of the proceedings.

The defendants had agreed not to trespass or to deal with the property other than in accordance with the protections afforded to the family under the Residential Tenancies Act.

Vincent P Martin SC, for the defendants, said his clients were consenting to the various orders. The court had suggested the defendants obtain legal advice, which they had done, he said.

Counsel said his clients should have gone about things a different way. It was their case arrears in rent are due and it would be sought to end the tenancy through the Residential Tenancy Board. He said his clients also disputed various allegations made against them.

Mr Whelton was left “distraught” after reports of the case appeared “all over the media”, he said.

Mr Whelton is well-respected in his locality, is aged in his 70s and neither of his clients werein good health, counsel added.

The family claimed they moved into the house after Mr Whelton agreed in 2012 to rent the property for €500 a month in cash.

Ms Hadley claimed he refused requests from her for a rent book, tenancy agreement or receipts.

She claimed there were no difficulties until about 2016 when Mr Whelton occasionally sought higher rent payments of €750 and, on one occasion, €1,000.

Her partner was running a sole trading mechanic business at the property by 2016 and they paid the extra rent for reasons including the local school was well equipped to deal with one of their children’s autism, she said.

By last August, Ms Hadley was unable to return to work as a chef due to an injury and the family’s finances came under pressure. She claimed Mr Whelton agreed to her claiming State housing allowance but told her a month later he was increasing the rent to €750.

When she raised their rights as tenants, Mr Whelton told her, if they did not pay the extra rent, he would “get them out of the property”, she claimed.

It was claimed Mr Whelton informed them that a family member required the property, and they were to vacate it.

Her solicitors advised Mr Whelton by letter that the purported notice of termination and of increase of rent were invalid.

The case has been adjourned.