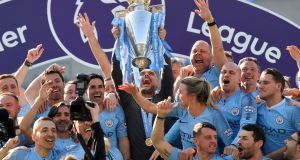 Manchester City manager Pep Guardiola lifts the trophy as they celebrate winning the Premier League in May. Photograph: Toby Melville/Reuters

People who illegally stream live English Premier League football matches will find the service blocked when the season kicks off next month following a court order.

The ISPs were either supportive or neutral over the application, Mr Justice Robert Haughton was told.

Under the order, the content provided by the illegitimate servers or hosts, using streams from legal broadcast outlets, will be targeted in real time for disabling using the latest advances in technology, the court heard. It will be possible to block streams across several platforms and apps “in one blow”, the court also heard.

The internet protocol (IP) addresses of the streaming hosts will be updated at least twice during match time so that the blocking can be enabled, Jonathan Newman SC, for the premier league company said. It will be possible to respond “within minutes” to the illegal streaming, he said.

The court heard similar blocking orders were obtained last year in the UK where a court heard the problem of illegal streaming of the games had become ubiquitous.

It was no longer just “a student on his couch with a laptop” illegally streaming but had become so overwhelming that the bulk of infringements came from people with “set top boxes” plugged into their TV, counsel said. It was such that “perhaps a veneer of respectability” had crept into what was an illegal activity, he said.

The technology did not allow the identification of end users but the blocking technology was similar to that used when Ireland became the first jurisdiction to enable blocking of copyrighted music and films following a court order, he said.

Part of the order sought contained confidential information which would only be known to the court and the parties involved because if it was disclosed it would enable circumvention of the order, counsel said.

The blocking technology will be stopped after the games have ended and will be reset each week so as to respond to the changing nature of each infringement, counsel said.

Alleged infringers will also be notified each week and will be required to notify the end users of the order. It will also permit alleged infringers to make application to the court for unblocking should any of their legitimate material be blocked.

Asked by the judge how effective the blocking orders had been, counsel said academic research showed, in relation to music and film, access to such material had reduced by 90 per cent, while the overall rate of piracy (by hosters) had reduced 22 per cent, There had been an increase of 6 per cent take-up of legitimate services like Netflix and 10 per cent for the BBC.

One of the effects of this was to “bring to and end the mistaken belief” as to the legitimacy of illegal provision of paid-for streaming, counsel said.

Mr Newman said the criteria for obtaining the order was clearly met and there were appropriate safeguards to ensure it did not impact on legitimate use of the internet.

Granting the order Mr Justice Haughton said he noted from the UK case brought by the Premier League that the judge there said continued illegal streaming undermines the value of of the FA’s rights and if unchecked was likely to impact on returns for the football clubs and wider sporting community.