Solicitor argues insufficient evidence to support the finding of misconduct 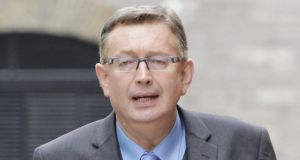 Solicitor Gerald Kean’s denial of complaints made against him by a former client was “incoherent, confused and made very, very little sense”, the Law Society has told the High Court.

This matter was “extremely serious” and the society agreed with the Solicitors Disciplinary Tribunal it involved professional misconduct at the higher end of the scale justifying a fine of €20,000, Remy Farrell SC said during arguments opposing Mr Kean’s appeal against the findings and fine.

Mr Kean’s initial misconduct in his handling of the proceedings brought by his former client Christopher O’Neill may have arisen from negligence and oversight but of most concern was the solicitor’s “increasingly desperate and elaborate” efforts over months to cover that up, Mr Farrell added.

Because honesty is one of the core values of the solicitors profession, a solicitor must be honest in their dealings with a client and the society was very concerned at the amount of effort that went into concealing these matters, counsel said.

While Mr Kean had described as “relatively trivial” the sum of money involved — a judgment for €1,067 entered against Mr O’Neill — this was not about the amount of money but issues going to the very heart of the relationship between solicitor and client, he added.

The society agreed the misconduct did not merit a strike off order, he added.

In submissions for Mr Kean, Fiona Gallagher BL argued there was insufficient evidence to support the finding of professional misconduct. There was also no conduct of a disgraceful or morally culpable nature, or any gross negligence on the part of Mr Kean in this matter and it was Mr Kean’s case there must be such conduct or gross negligence before a finding of professional misconduct can be made, she said.

By the end of the misconduct inquiry hearing before the Tribunal,it was evident Mr O’Neill disliked Mr Kean despite his insistence he was not acting out of spite, she added.

Ms Gallagher said Mr Kean had paid the €1,067 judgment with the agreement of Mr O’Neill and had done the same for other clients in financial difficulties on the understanding he would be remimbursed later.

Having heard submissions from the sides, the President of the High Court, Mr Justice Nicholas Kearns, reserved judgment on the solicitor’s appeal against the Tribunal’s findings of professional misconduct made in May last.

The tribunal upheld three complaints by Mr O’Neill (59), Drumsna, Co Leitrim, a businessman who said he instructed the solicitor in proceedings arising from his dispute with another party over the nature of repairs carried out to a yacht owned by Mr O’Neill.

Mr O’Neill had engaged a marine engineer to carry out analysis of the repairs with a view to taking legal proceedings over those. After the engineer said he would not testify for the intended proceedings, Mr O’Neill refused to pay an invoice for the engineer’s report and alleged breach of contract.

When legal action was initiated in 2005 in pursuit of payment of the invoice, Mr O’Neill claimed he instructed Mr Kean to represent him but was later notified by post summary judgment in the sum of €1,067 had been entered against him and demanding payment. Mr O’Neill claimed the case was ultimately settled when Mr Kean paid over a cheque to meet the judgment. Mr O’Neill made 17 complaints against Mr Kean and the SDT found a prima facie case was made out for an inquiry into six of those. Following an inquiry over three days, it found professional misconduct in relation to three of the complaints but made no findings on the other three.

The Tribunal found misconduct in relation to claims Mr Kean knowingly misled Mr O’Neill into believing a notice to defend the civil summons had been submitted; that Mr Kean failed to lodge an appeal against a decree for judgment and that he knowingly led Mr O’Neill to believe an appeal had been lodged.

Following the tribunal’s findings, the Law Society agreed with its recommendation Mr Kean pay €500 restitution to Mr O’Neill and €750 expenses and also be censured via a fine of €20,000. If his appeal against the Tribunal’s findings is dismissed, Mr Kean is not disputing the total €1,250 payment to Mr O’Neill but is challenging the severity of the proposed €20,000 fine.