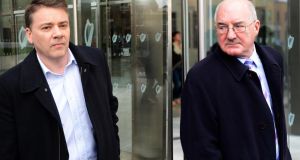 Two former Anglo Irish Bank executives have been sent forward for trial in connection with an alleged fraudulent €8 million loan.

Willie McAteer and Pat Whelan were served with books of evidence today when they appeared before Judge Anthony Halpin at Dublin District Court.

Judge Halpin was told the DPP consents to the two bankers, who are both on €11,000 bail, being returned for trial to the Dublin Circuit Criminal Court. The judge made the order sending them forward for trial and said they must face their next hearing on November 20th, when the case will be listed for mention.

Former finance director Mr McAteer is accused of fraudulently obtaining a loan from Anglo Irish Bank to pay off a personal loan with Bank of Ireland in September 2008.

Mr Whelan (52), former director of lending at Anglo, is accused of being a party to the same loan.

Mr McAteer (63), of Green Rath, Tipperary and Mr Whelan, from Coast Road, Malahide, Co Dublin, have not indicated how they intend to plead and there was no objection to them remaining on bail.

They were also given the standard warning that if they intended to use alibis in their defence, they must notify the prosecution within 14 days. Mr McAteer quietly said “yes” when asked if he understood and his co-accused nodded when he was given the same warning.

The judge also directed that copies of video evidence be handed over to their solicitors, Michael Hanohoe and Michael Staines, who represented them at the hearing.

The two men had been originally charged in August and face one count of breaching the Companies Act in 2008. Neither man who had been arrested by appointment at the Bridewell Garda station made any reply to the charges after caution, the District Court heard in August.

The case had been adjourned until today to allow time for the preparation of a book of evidence.

Bail has been sent in the defendants’ own bonds of €1,000 each and independent sureties of €10,000. No cash lodgements have been required.

They have been told that must notify gardaí within 48 hours of any intention to leave Ireland or the UK. They have to tell gardaí if they intend to change address.