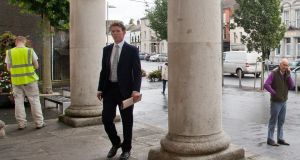 Three members of the O’Callaghan family, horse breeders at Yeomanstown Stud in Co Kildare, are to be prosecuted after the alleged discovery of illegally held animal remedies on their premises.

Gay O’Callaghan and Annette O’Callaghan and their son, David O’Callaghan, from Naas, are facing 16 allegations at Naas District Court including possession of animal sedatives without the required authorisation. Alice Bena Hickey, The Curragh, Co Kildare, is facing three charges in relation to the case, while Jim Cosgrove, of Cosgrove Pharmacy, Edward Street, Newbridge, faces 20.

Noel Whelan, prosecuting, told Judge Desmond Zaidan that on September 12th, 2014, and on other dates, a veterinary inspector from the department visited the stud. While there, he found and seized animal remedies, which were held illegally and without authorisation. He said some of the remedies should only have been in the possession of a vet and some required a prescription.

“We believe many of them would have been coming from the US,” he said.

He also said Ms Hickey was accused of selling products not in accordance with regulations, as was Mr Cosgrove.

Asked by the judge whether there were allegations of harm to any animals, Mr Whelan said no. He also said the DPP was recommending summary disposal of the case, meaning it could be dealt with at the District Court.

Mr Whelan said the substances involved in the case were “significant”, but the offences were on the minor end of the scale. “In relative terms, they are minor allegations,” he said.

Legal representatives for the defendants sought time to consider materials provided through discovery. Ms Hickey was also expecting a baby in October, the court was told.

The judge adjourned the case to December for mention and said he would listen to the defendants on the issue of jurisdiction if they wished to address him. He would then decide whether to deal with the case or send it forward for trial by jury. Offences under the animal remedies regulations attract a fine of up to €5,000 or six months in prison, on summary conviction. Conviction before a jury attracts a fine of up to €500,000 or three years in prison.

Yeomanstown Stud has an international reputation for horse breeding. Successes include Dark Angel, one of the leading stallions in Ireland, and Camacho, who sired five stakes-winning two-year-olds in 2013.