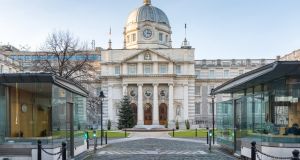 The complex went into lockdown at around 3pm when security staff were alerted to an intruder who got past the gates and onto the grounds. Photograph: iStock

A 29-year-old man has been barred from Government Buildings after the perimeter of Leinster House was breached on Tuesday.

The complex went into lockdown at around 3pm when security staff were alerted to an intruder who got past the gates and onto the grounds.

Miodrag Pester, who is homeless, was arrested and brought to Pearse Street Garda station.

The Romanian national was charged with trespassing on Government Buildings, at Merrion Street, Dublin 2, on January 19th. The offence is contrary to the Public Order Act.

He was held overnight and appeared before Judge Brian O’Shea at Dublin District Court on Wednesday .

The charge states it is alleged Mr Pester trespassed on the curtilage of Government Buildings in a manner that caused, or was likely to cause, fear in another.

Garda Sean Scully told the court that Mr Pester said “ I am guilty” in reply to the charge.

The garda feared the accused was a flight risk and he has given different addresses, including one in Raheny, over the last two years.

Following a recess, bail conditions were canvassed and the court heard Mr Pester agreed to obey them

He was ordered to stay away from Government Buildings and to sign on twice a week at Clontarf Garda station.

Judge O’Shea set bail his own bond of €100 and ordered him to appear again on a date in March, when he will be expected to formally enter a plea.

He also ordered disclosure of prosecution evidence to the defence.

Legal aid was granted after the judge was told the accused “has no means”.