Justice for little people: A lawyer-free day in court

Dodgy builder? Holiday disaster? Small claims has been getting justice for 25 years 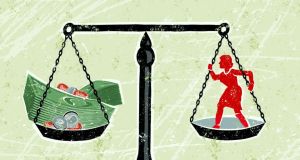 he European small claims procedure, a Europe-wide equivalent scheme, arrived in Ireland in 2008

Eddy-France Lebamba got married in May 2017. Through her wedding planner, she hired Toms Kalufando to film the event. Ten months later, she had not received the footage she had paid for.

A small claims hearing before the Dublin District Court on March 5th heard that Lebamba had paid Kalufando €650 for his services but he had become uncontactable following the event, and had denied her access to the unedited material.

Meanwhile, footage of the event had been used in his social media promotions. When she asked for a refund, it was not forthcoming.

“Just because you are in an artistic game doesn’t mean you are any different from other service providers,” Judge Michael Coghlan told Kalufando.

“This is a fairly simple case,” the judge concluded. “There was a simple contract for services. Payment of money for the taking of a video and the handing over of that video.”

“You’re very lucky, sir, you are not in bigger trouble,” he said, citing the unauthorised use of the wedding footage on social media.

Eddy-France Lebamba got her €650 refunded, and Kalufundo was directed to hand over the original footage of the wedding.

A separate small claims case that day sought a refund for the early wind-up of a tenancy agreement. Naomi Muresan and Oana Ciocan had been renting a room in Valerie Pradeles’ property and were asked to leave in April 2017.

Disagreements over utilities and the use of shared space had led to tensions and ultimately the breakdown of the tenancy. Muresan and Ciocan left the premises before the expiry of the notice period.

They filed a claim for the return of their security deposit, a refund of half a month’s rent and compensation for the installation of Romanian television channels.

Pradeles said the claimants’ keys to the property had not been returned and counterclaimed for the cost of a locksmith to change the locks.

“The fact that [the claimants] chose to leave, albeit under some pressure, didn’t mean that it was forced upon them,” the judge ruled, noting the tenancy agreement was “far too informal”.

He ordered a payment of €794 for the return of the security deposit plus 11 days’ rent. The judge discarded the television installation claim and the counterclaim for locksmith costs, on the basis it had been done before the agreed departure date.

He also directed that the keys be returned.

Established in 1993 as an affordable mechanism for consumers to have their rights enforced in matters of small monetary value, Ireland’s small claims procedure (or small claims court) will mark a quarter century in existence this year.

“Primarily, the court provides an avenue for citizens to pursue small claims that in the ordinary course of events wouldn’t justify the engagement of a solicitor,” said Tom Ward, former chief clerk of the Dublin circuit and district courts.

At the heart of the procedure is the lack of a requirement for legal representation, and the associated costs. Its introduction was a move to enhance the standing of consumers in situations where grievances would otherwise be set aside due to expense, time and general inconvenience of going to court.

Lobbying by the Consumer Association of Ireland led to the launch of a pilot programme in four locations across the country in 1991.The pilot was deemed a success, leading to the official launch of the small claims procedure in late 1993.

“There was a stronger reaction than there might be now. The public was very engaged because they had very few channels they could engage on consumer issues,” said Dermott Jewel, policy and council adviser with the consumer body.

“There was very little consumer protection at the time. There was no access to remediation that was affordable. You took a case at your own expense and suffered the consequences if you didn’t win,” he added.

A small claims registrar – the district court clerk – processes claims and where possible, looks to mediate a settlement without the need for a court hearing. Where this is not possible the registrar sends the case for a hearing before the district court.

Claims can be made relating to goods or services bought for private or business use, minor damage to property and the non-return of a rental deposit. In the main they tend to relate to household and electrical goods. Building services, cars and package holidays also account for significant proportions.

The court has proved effective as a consumer tool.

“The mere existence of the small claims facility has facilitated an environment among businesses that if they don’t pay attention to what consumers want there is an effect,” says Ward. “It supports an environment where business have to up their game and ensure a proper in-house system for dealing with consumers who are not happy.”

Most claims made do not end up in court. A large number are dismissed for not being within the remit of the small claims procedure. And a significant proportion of valid claims are ultimately settled by the registrar.

Of 1,567 valid claims made under the domestic small claims procedure in 2016 – the latest data available – 36 per cent were settled by the registrar, with 40 per cent given a court date. The remainder were either not proceeded with or given decrees by default.

Ease of access for anyone looking to make a claim is a central element of the process, and claims have become significantly more accessible in recent years. An online facility to make claims was introduced in late 2006, creating a 25 per cent spike in applications in 2007.

“The online system certainly makes it easier for people to make applications. Previously you would have rung up or come into the office to fill out a form. You would have had a chance to speak to somebody before filling out the application. That might account for part of the increase,” says Ward.

Ineligible claims have also risen. Just over 1,000 claims in 2016 were deemed outside the scope of the procedure.

Small business owners have complained that the ease of access leaves the door open for some consumers to bring less valid claims, while a day in court for a business can carry indirect costs.

Ronan O’Brien, entrepreneur and founder of Zatori Results Ltd, was respondent to a case in Portlaoise in February regarding the return of electrical goods. While he won the case, the time involved in preparing for the case and attending court with an employee cost the business significantly, he says.

O’Brien says the system could be more efficient.

One issue he identifies is that a case might not be dealt with until 4pm “but you have to sit around in court all day”. “If a dentist can give you an appointment there is really no reason everyone has to be in at 10am,” he said.

“What about if we had a text messaging system where people could say in advance if they were going to show up. Or if there was a cafe around the corner where you could let people go and do some work until their case is called. There’s just a lot of wastage there.”

But the call-over system of deciding time slots the morning of the case remains the most efficient possible for now, according to the courts service.

“Businesses have to weigh up the cost of their time. If somebody decides to contest that is their prerogative,” says Ward. “We would like to assign particular slots, but in reality until we have the call-over at the start of the day, we have no idea what cases have been settled and which have to go to a full hearing.”

“It’s a bit like what the airlines do with seats. We have quite a few over in case of no shows,” he added. “If everyone keeps the court in the loop, I don’t think there is a better system.”

An underused mechanism is a cross-border claim. The European small claims procedure, a Europe-wide equivalent scheme, arrived in Ireland in 2008 and allows consumers to take cases against parties in other EU states, with the case ruled upon in the consumer’s home country, and enforced abroad. Claims can be for values up to €5,000.

It was used quite a bit during the Icelandic volcanic ash cloud in 2010, when claims against Irish airlines spiked following the grounding of aircraft. But use – and knowledge – of this scheme in Ireland remains low.

While the number of EU small claims cases filed in Ireland has since increased somewhat, their level remains low: 175 such cases were dealt with by the court in 2016, and 129 in 2015.

Since 2010, businesses can also avail of the process to make claims – though few do. “The perception is that it’s solely a business-to-consumer tool,” said Sven Spollen-Behrens, director of the Small Firms Association.

“Where it could benefit small business is with payment culture – late payments – this is where it could come in useful, but it’s not being used,” he said.

“We’ve seen very small numbers of business to business claims. Part of the reason is businesses are more likely to write off debt,” says Ward. “Sometimes they reach an amicable solution in the interest of future relationships.”

There are also cases where a respondent’s failure to present can have serious consequences for businesses.

A small claims case in March before the Dublin district court saw Robert Krysiak take a claim against Baileys Auto Point Ltd for not fitting a diesel particulate filter on a vehicle he bought from them. The claimant got the missing part fitted elsewhere and sought €2,000, from Baileys.

While the judge noted in ordinary circumstances he would insist on a repair-and-replace scenario, as the respondent had not turned up he made a decree for the full amount, as well €120 for Mr Krysiak’s translator.

“If somebody had opposed you, you would not have succeeded,” the judge told Krysiak.

Time to raise the maximum value of small claims cases?

The cut-off value of small claims cases taken in Ireland should be raised from its current levels, according to the Consumer Association of Ireland

Under current legislation, the maximum financial value of a case that can be heard under the domestic small claims procedure is €2,000, a level which has remained constant since 2006.

“In reality it is past time that the limit of the value be revised in terms of taking it upwards,” said Dermott Jewel, policy and council adviser with the association.

“The limit as it stands at €2,000 probably acts, because it is so low, as a disincentive for consumers to use the system. It’s a terrible shame,” said Mr Jewell.

The European Small Claims Procedure, an EU-wide version of the process, through which parties can make cross-border claims, raised its maximum claim level to €5,000, from €2,000 in July 2017.

“The world has changed and so has the base value of the average transaction,” says Jewell.

A 2009 review found the existing limit remained appropriate and that an increase risked a negative impact on the level of service provided . An increase in the limit would increase the number of claims made, increasing the burden on an already-stretched courts service.

The cost of the service would likely also have to increase from €25, which would hamper the likelihood of consumers taking cases over particularly low value claims.

Alan Shatter noted during his tenure as justice minister that he “would be tempted” to increase the limit to between €3,000 and €5,000, citing the rising costs of goods and services.

However, he declined to introduce legislation to change it due to ongoing debates over the limit of the European procedure at the time and the risk of causing confusion if the limits of both the domestic and European procedures were increased at the same time.