Grandmother fined for having cocaine outside Cork bingo hall

Helen Heaphy charged with having illegal drug for sale or supply 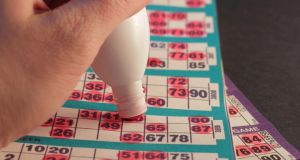 A 50-year-old grandmother, who was caught with cocaine outside a bingo hall in Cork city, has been fined €750 for having the drug for sale or supply. File photograph: Thinkstockphoto

A 50-year-old grandmother, who was caught with cocaine outside a bingo hall in Cork city, has been fined €750 for having the drug for sale or supply.

Cork District Court heard on Wednesday that Helen Heaphy of Kerryhall Road, Fairhill, Cork was arrested on July 9th, 2014 and charged with two counts arising out of having drugs on her person.

Garda Danielle Hegarty said Ms Heaphy was outside Rockbingo on the Deanrock Industrial Estate in Togher, Cork on the night in question when she was arrested by gardaí. Following a search by gardaí she was found to be in possession of cocaine worth €350.

She subsequently pleaded guilty to charges of possession of cocaine and having the substance for sale or supply on the day of her arrest.

At Cork District Court Judge Leo Malone asked what the accused was doing with cocaine at a bingo hall. Ms Heaphy’s solicitor Frank Buttimer said there was no suggestion of her being in the bingo hall with cocaine.

“The event happened outside the bingo hall. At the request of someone she carried it to give to her. It was a stupid act which placed her (Ms Heaphy) at risk of imprisonment.

“She is 50-years-old, she is separated and is a mother and grandmother with responsibilities in relation to her family,” he said.

Mr Buttimer said Ms Heaphy co-operated fully with the Garda enquiry and indicated at the earliest opportunity her intention to plead guilty.

Mr Buttimer said Ms Heaphy was back playing bingo at the premises as the owner has consented to allow her to attend. One of the terms of her bail was that she not frequent the bingo hall.

Judge Leo Malone fined Ms Heaphy €750 for having the cocaine for sale or supply.