Estranged husband of Joanna Lee charged with her murder

Keith Lee (42) appears at special sitting of court in Dubin 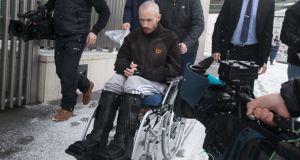 A man has been charged in relation to the murder of Joanne Lee, whose body was discovered in a house on Ranelagh Road in Dublin last month.

Her estranged husband Keith Lee (42) was charged at about 10.30pm on St Patrick’s Day in Irishtown Garda Station and appeared before a special court sitting in Dublin’s CCJ courts complex on Sunday.

Sgt Jonathan Kelly told Judge Gráinne Malone in the Dublin District Court that when charged Mr Lee made no comment.

Mr Lee, whose address was given as no fixed abode, was remanded to Cloverhill Prison until his next scheduled court appearance on Wednesday.

Judge Malone said he was to receive any medical attention he required. A request was made for legal aid and there was no application for bail.

Mr Lee was dressed in a grey tracksuit, black top and wore black orthopaedic boots on both legs. He arrived for the court sitting in a wheelchair and left in a wheelchair taxi afterwards under Garda escort.

The remains of Ms Lee, also known as Joanna Ball, were found in a wardrobe in a flat on Ranelagh road after she was reported missing.