Woman was given wrong ashes after 10-year-old pet was put down, court hears 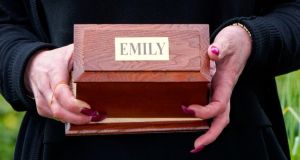 A 68-year-old vet has been cleared of trying to obtain money by deception after he charged a woman for the cremation of her dog only for her to discover that the ashes she received did not belong to her beloved pet.

Con Twomey of Coachford, Co Cork, had denied the charge that he dishonestly by deception induced Noreen O’Mahony into paying him €200 for the cremation of her dog, Emily, with the intention of making a gain for himself and causing her a loss between January 31st and February 24th last year.

Ms O’Mahony told Macroom District Court when her Belgian shepherd, Samson, was put down in 2015 by a vet in Ballincollig, she had the dog cremated by a firm in Castleisland called Pets to Rest and received a casket with Samson’s name and a certificate stating it contained his ashes.

A year later when her other Belgian shepherd, 10-year-old Emily, took ill she called Mr Twomey and he diagnosed the dog had eaten rat bait and would not survive. They agreed to have the dog put down and he promised to get her cremated for a fee of €200.

However, when she collected the casket for Emily three weeks later, she noticed both the casket and the bag with ashes were much smaller and lighter than what she had received when Samson was cremated, and when she asked Mr Twomey about it, he became “very agitated and shifty”.

He told her Pets to Rest had done “a very unprofessional job and had only returned partial ashes” but he changed his story to say Emily had been sent to a firm in north Cork for cremation but when she rang the firm, they told her they did not do cremations but were an animal waste disposal firm.

“I was charged €200 by Con Twomey for a cremation that was not done by Pets to Rest – I don’t know what is in this bag but I know it is not my dog Emily . . . I could have dealt with the truth – that he made a mistake – but I was lied to and led a merry dance by Con Twomey,” she said.

Now-retired Garda Flor McCarthy said Mr Twomey had a made a statement to him on March 23rd last year in which he said he had put Emily down at his surgery but he admitted failing to label her body when putting her in the deep freeze.

Mr McCarthy told Garda McCarthy it was his intention to have the dog cremated by Pets to Rest but the following day or soon after Burkes of Bartlemy called to collect animals from the deep freeze for disposal and the O’Mahonys’ dog was given to Burkes in error.

“Within a few days I realised my mistake that I had forgotten to label the O’Mahony dog and if I had done so, Burkes would not have taken her. I went ahead and ordered a casket from Pets to Rest with a name plaque thinking that that symbol would suffice and I put the ashes in the casket,” he said.

The O’Mahonys were such nice people that he didn’t want to upset them by telling them about the mistake so he called to them to apologise on February 24th and offered to pay back the €200 but they declined, he told Garda McCarthy in his statement.

Judge James McNulty said Mr Twomey had admitted in his statement he made a mistake by not labelling Emily’s remains but he made matters worse in “his hamfisted way” by buying a casket with Emily’s name on a plaque and presenting it with what he purported to be Emily’s ashes.

“To order a small wooden casket and dress it up with a tacky plaque and present to the owner was inexcusable for a professional man of 44 years’ experience . . . His action was well meaning but deeply deceitful and it was, to use his own words, ‘shameful behaviour’,” said Judge McNulty.

However, for the State to succeed, it needed to prove Mr Twomey not only carried out a deception but that he did so with the intention of making a gain.

The judge believed that the State had failed to prove intent and for that reason, he had a doubt and dismissed the charge.