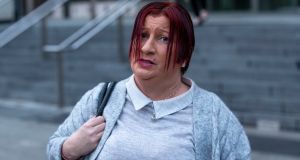 Barrister reminded the jury that Mr Tims’s then girlfriend Elizabeth McDonagh described the build-up to the assault. Photograph: Collins Courts

A 48-year-old man who kicked his father to death was “provoked” by his “domineering and controlling” father and should be found guilty of manslaughter and not murder, a barrister has told a jury at the Central Criminal Court.

Vincent Heneghan SC delivered his closing speech on Tuesday morning to the seven women and five men in the trial of Mark Tims who has pleaded to manslaughter but not guilty to murdering his father Anthony “Tony” Tims at the home they shared at Rowlagh Green, Clondalkin, Dublin 22 on July 13th, 2018. His plea was rejected by the State.

Mr Heneghan said Mr Tims Snr’s actions for many years were those of a “controlling domineering person, a dominant person” and that this type of behaviour “continued for Mark Tims’s whole life.” He reminded the jury that Mr Tims’s then girlfriend Elizabeth McDonagh described the build-up to the assault saying the older man came home after celebrating his 74th birthday in the pub and told his son to get out of the house or he would call the guards. Ms McDonagh said Anthony Tims also told his son he wished he’d never been born and called him a “disappointment”. Counsel said this type of situation happened not just once but, “possibly over a lifetime” and there was, he said, a “build-up, an animosity”. He said it was sad that his client reacted how he did, but urged the jury to find that he was provoked and return a manslaughter verdict.

The trial is continuing on Tuesday afternoon in front of the jury and Mr Justice Tony Hunt.

1 Coronavirus: What we know so far about how Ireland is affected
2 Coronavirus: Ireland plans for massive increase in tests
3 Garda Commissioner ‘stands over’ IRA-Sinn Féin remarks
4 Woman (38) appears in court charged with murder of Garreth Kelly
5 What is coronavirus and what should I do if I have symptoms?
Real news has value SUBSCRIBE