‘No evidence’ for terrorism links behind Dundalk killing 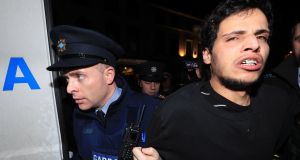 Gardaí ruled out terrorist links to the “random” stabbing of a Japanese man on a public street by an Egyptian man who claimed to be a member of Islamic State, the Central Criminal Court has heard.

Det Insp Martin Beggy told the trial of Mohamed Morei, who is accused of murdering one man, stabbing a second and striking a third with a weapon, that the accused’s claims that he was part of the terrorist group Islamic State, also known as Isis, were “rambling” and “totally incoherent”. Describing the attacks as “random”, he added: “There is no evidence to suggest any links whatsoever to terrorism.”

Consultant psychiatrists Dr Brenda Wright and Dr Paul O’Connell also told the trial that the accused has been diagnosed with paranoid schizophrenia and at the time of the attacks he believed he was justified in what he was doing and was unable to refrain from the attacks.

Mr Morei (20), of no fixed abode, has pleaded not guilty by reason of insanity to the murder of Yosuke Sasaki (24) at Long Avenue, Dundalk, Co Louth, on January 3rd, 2018. Opening the trial earlier this week prosecuting counsel Seán Gillane SC told the jury that Mr Morei has been diagnosed with paranoid schizophrenia and that at the time of the attacks he did not know what he was doing was wrong and was unable to refrain from the acts.

The accused said, “yes” when asked if he represented Islamic State but later said he did not represent anybody. He then said he killed the man “for God”. The witness described Mr Morei as “rambling” about the British and when asked why he did not like the British, Mr Morei said: “Because I’m Isis.”

The inspector also noted that one thing linking the three people assaulted by Mr Morei that morning was that they were wearing headphones.

Dr Wright told Mr Gillane that there was evidence Mr Morei has a mild intellectual disability. She said at the time of the attacks he was hearing voices in his head that were commanding him to do things and giving a negative and distressing running commentary on what he was doing. He believed he had been poisoned by the Police Service of Northern Ireland and that racist references were being made to him through the radio and that people were making fun of him.

She said he had “false fixed beliefs” that he believed even in the presence of evidence to the contrary. These symptoms are characteristic of schizophrenia, the witness said.

She found that he qualified for the verdict of not guilty by reason of insanity because he was suffering from paranoid schizophrenia, a mental disorder. At the time of the attack he believed he was under surveillance and there was a grave risk to him. She added: “So he believed it was morally justified for him to do what he did and he was unable to refrain from his actions.”

The witness said that in the event of a not guilty by reason of insanity verdict Mr Morei will be assessed for future treatment at the Central Mental Hospital. Dr Paul O’Connell agreed with Dr Wright’s conclusions.

Delivering their speeches to the jury both Mr Gillane and defence barrister Michael Bowman SC urged the jury to deliver the “only verdict” open to them on the evidence, that of not guilty by reason of insanity.

Ms Justice Carmel Stewart will charge the jury of seven men and five women on Thursday.