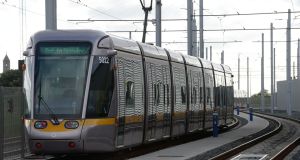 An man who sexually assaulted a young woman on a Luas has been jailed for nine months.

Abdullah Shinwari (31) rubbed his penis against the young woman’s lower back as he stood behind her on the tram and ejaculated on her clothes.

The victim described how she was “frozen” during the assault and cleaned her clothes in a toilet.

The woman outlined through her victim impact statement how the offence had affected her life and left her feeling “dirty and scared.”

“I would never wish this on anyone and hope he won’t get chance to do this to another woman,” she told the court.

Judge Martin Nolan said this was “obviously a disgraceful and shameful crime”. He noted the man has an “interesting and very challenging history”.

Judge Nolan sentenced Shinwari to two years imprisonment, but suspended the final 15 months on strict conditions including that he follow all directions of the Probation Service for 15 months post release.

He said the sentence would have been longer but for the fact that custody will be more difficult for Shinwari as an Afghani national and because he will likely be facing 23 hour lock-up as “we live in Covid times”.

Keith Spencer BL, defending, said Shinwari had come to Ireland from Afghanistan in October 2018 by way of a “fraught passage” on foot, in cars and on the back of a truck.

Mr Spencer said he had fled persecution by the Taliban after he refused to give data to the intelligence services. He contacts his wife and child when he can.

Counsel said he has been in direct provision since he arrived and has worked in jobs such as delivery and fabrication.

He said Shinwari had been previously hospitalised for issues related to stress, anxiety and depression and was taking medication for depression.