No prosecution in case of fisherman’s death off Skerries 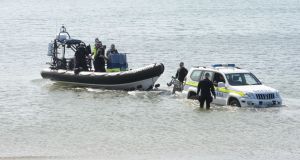 Members of the Garda Under Water Unit search at Skerries harbour after a fishing boat sank on May 26th, 2017. Photograph: Alan Betson

The Director of Public Prosecutions has directed no prosecution in the case of a fisherman who died after the fishing vessel he was working on capsized off the Dublin coast.

The body of Jamie McAllister (28) was recovered from the sea at Skerries Harbour on the morning of May 27th, 2017.

He was brought to Connolly Memorial Hospital in Blanchardstown after he was recovered from the sea.

A postmortem examination conducted by Professor Eamon Leen gave the cause of death as drowning.

At Dublin Coroner’s Court, the Health and Safety Authority and Garda said their investigations had concluded and the DPP directed no prosecution into the incident.

Mr McAllister was out fishing for razor clams with his uncle Keith McAllister on May 26th, 2017 when their boat went down.

A major search operation was launched and the man’s body was located abot 500m from the pier at Skerries the following day.

A member of the public raised the alarm when they saw the boat capsize and the Skerries RNLI lifeboat was at the scene within minutes.Keith McAllister was rescued from the water after the boat capsized.

A multi-agency search was co-ordinated by the LÉ Niamh along with the Irish Coast Guard.