Jim and Josie Connors lost their son, his wife and three grandchildren to a fire at a Carrickmines halting site in 2015, which also claimed the lives of five others and an unborn baby. Kitty Holland meets them in their new home. Video: Bryan O’Brien 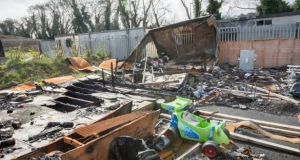 A file image of the Glenamuck Road halting site in Co Dublin where 10 people died in a fire in October 2015. Photograph: Brenda Fitzsimons/The Irish Times

Relatives of 10 people who died in a fire at a Dublin halting site have told an inquest of the desperate attempts made to save a number of children who were trapped in a burning mobile home.

Dublin Coroner’s Court on Tuesday heard evidence from survivors of the October 10th, 2015 fire at the the Glenamuck Halting Site in Carrickmines.

Thomas Connors (27), his wife Sylvia (30) and three of their five children - Jim (5), Christy (3) and six-month-old Mary - died in the fire. Willie Lynch (25), his partner Tara Gilbert (27), who was pregnant, and their two daughters Jodie (9) and Kelsey (4), who often stayed with the Connors in their mobile at the Glenamuck site at weekends, were also killed by the blaze.

John Keith Connors, a brother of Thomas Connors, said he was woken by a noise and looked out a window and saw flames coming from his brother’s home. He and another brother, Jim Connors ran to help.

“I saw Jim lift baby Mary out, her cot was by the window, the blankets were covered in black smoke,” he said.

The infant was handed to Kathleen Connors McDonagh, who placed the child in her mobile home next door.

John Keith Connors then entered the burning mobile through the bedroom window. He said he held his breath and was unable to see.

“I could feel Tom close to the window, he was wearing a t-shirt and jeans, I could feel the fabric,” he said, adding that he passed the child out to his brother.

John Keith Connors said he then found his brother, Thomas amid the flames but was unable to move him. He was also unable to move his sister-in-law, Sylvia. He said he was then told to come out as the fire was growing . He then tried to use a fire extinguisher to control the flames.

“There was a pin, I took it out and I pressed the handle. I could feel the weight of it but there was nothing coming out,” John Keith Connors said.

Katie Connors said Baby Mary, who was passed out the window to her, “was still alive, she was breathing”.

“I handed the baby to Kathleen, I told her still breathing and to put her somewhere,” she said. “Then I saw a child being handed out, John Keith was holding him upside down..it was Tom. I took the child and saw his eyes rolling in his head. I thought the child was dead in my arms. I fell on my knees, I was in shock...At this stage I thought everyone was dead.”

Ms Connors McDonagh, a sister of Thomas, recalled being handed baby Mary and said she ran with the child to her own mobile home. Within minutes, she said noticed flames coming from the front door of her home, which the fire had spread to.

Her son, John was standing outside and he said ‘Mam, Mary is not okay’. She tried to help the baby, but firefighters stopped her.

Jim Connors junior, who was not in court, said he had been in Thomas and Sylvia Connors’ mobile home on the night before the fire broke out at around 4.30am.

“The children went to bed at 8pm. Thomas was smoking his weed. All the adults were drinking in the kitchen. It was a good time, not a word of an argument. It was 2am when I was leaving and we were all drunk,” he said in a statement.

Later, he was woken by the screams of his wife Katie and ran to help.

“I ran to get a pallet and put it at the window and reached inside. I couldn’t feel anyone. Then I grabbed a child and reached back. I don’t know who I handed the child to.”

The inquest heard there were four fire extinguishers located around the site. All four were in working order but none had been used.

There was conflicting evidence about electrical work at the site in the days before the fire. A number of relatives recalled electrical works inside Thomas Connors mobile home on October 9th. “They had made a mistake and were due to come back the next day,” Ms Connors McDonagh said.

However, Dún Laoghaire-Rathdown County Council executive Tom McHugh said there was no evidence of contractors or caretakers visiting the site that week.