Cancer patient died days after discharging herself from overcrowded hospital

Elizabeth Leavy (67) was left on a trolley in a hallway beside bins for six hours, court told 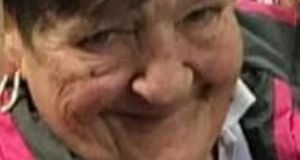 A 67-year-old cancer patient discharged herself from hospital due to overcrowding and died four days later, an inquest has heard.

Elizabeth Leavy, from Montpelier Road, Dublin 7, had been left waiting on a hospital trolley for six hours.

“She was left in the hallway beside the bins. She was afraid, in pain, uncomfortable and she was hallucinating. She couldn’t stick it,” Elizabeth Leavy’s daughter Joy Leavy said.

The mother of eight was strong-minded and a great role model, her family said.

“She was bubbly, fun, she saw the good in everyone and everything,” Joy Leavy said.

Elizabeth Leavy was diagnosed with oral and bowel cancer in 2017.

She went to the Mater Hospital emergency department on January 18th, 2018, following advice from her doctor. She had a cough and was feeling drowsy and was sleeping a lot, the inquest at Dublin Coroner’s Court heard.

Doctors performed tests on the woman and results prompted a query regarding her liver function.

However, Elizabeth Leavy discharged herself before her results were reviewed by a senior doctor.

She died four days later after she was found unresponsive at home on the morning of January 22nd, 2018.

Speaking after the inquest at Dublin Coroner’s Court, family members said they stayed with their mother all night in the Mater Hospital emergency department and were unaware her condition was so serious.

“We waited all night with her for test results and they told us she was okay. If we had . . . known they wanted to do more research we would’ve made her stay. She was left on a trolley in a hallway for six hours, a cancer patient, she’d had enough,” Joy Leavy said.

The cause of death was cardio-respiratory arrest due to multi-drug toxicity. The 67-year-old had toxic levels of the opiate-based pain medications Tramadol and Oramorph in her system, which had built up over time.

“These medications act centrally in the respiratory centre and it impedes your breathing. Your breathing stops and your heart stops and I think that is what happened that morning,” Coroner Dr Myra Cullinane said.

A postmortem report showed that the woman’s cancer was not active but she had chronic inflammation of the liver due to the accumulation of medications.

“The build-up of the medications in her system caused her death,” the coroner said, returning a verdict of misadventure.

“She’d gone through a lot of treatment and seemed to be doing well. It’s very tragic, she obviously had a loving and attentive family,” the coroner said.

“Overcrowded conditions bring a higher risk of dying. Every nurse and doctor knows this is a massive problem for patients, it affects their care and their outcomes,” he said.

“I reviewed [Elizabeth Leavy’s] notes in detail. There were questions we didn’t know the answer to and that would have been the reason for keeping her in the department. That being said, you can understand why, when there is no clear issue, a person would decide to leave,” Dr Breslin said.