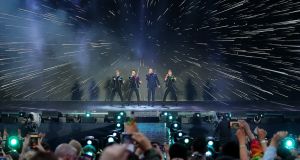 A woman who launched a ‘frightening, vicious and unprovoked’ attack on a fellow attendee of a Westlife concert at Croke Park 18 months ago has avoided a jail term. File photograph: Crispin Rodwell/The Irish Times.

A woman who launched a “frightening, vicious and unprovoked” attack on a fellow attendee of a Westlife concert 18 months ago has avoided a jail term.

Jackie Walsh (26) split the victim’s ear lobe during the attack after her earring got caught up when Walsh was pulling fistfuls of the woman’s hair.

The victim said she could feel blood pouring down her face and could see clumps of her hair all over her shorts during the assault.

The victim, who did not make a victim impact statement because she is currently going through a severe bout of depression, was treated by a doctor at the concert.

Her ear lobe was stitched up and she was given an anaesthetic. While she complained of an extreme headache for days after the attack, she did not require further treatment.

Walsh, of Clonard Park, Ballybeg, Co Waterford, pleaded guilty at Dublin Circuit Criminal Court to assault causing harm at Croke Park Stadium on July 5th, 2019. She has no previous convictions and has not come to garda attention since.

Judge Melanie Greally said the “facts speak for themselves” and described it as “a frightening, vicious and unprovoked assault which had immediate consequences for the victim”.

She said testimonials before the court indicate that Walsh’s behaviour was “entirely out of character” and she was not normally a person who was “inclined to engage in violent conduct”.

Judge Greally accepted evidence from Det Sgt Stephen Coleman that Walsh was heavily intoxicated on the night and genuinely did not recall the assault, which started after the victim indicated that Walsh was sitting in her boyfriend’s seat.

The judge acknowledged that Walsh was a bright young woman with plenty of potential. She noted that she has mental health difficulties, which she was addressing before the assault and continues to work on.

Judge Greally sentenced Walsh to 2½ years in prison which she suspended in full on condition that she undergo 12 months of probation supervision.

She acknowledged that Walsh had saved €3,000 as a token of remorse for the victim, who was willing to accept it. She ordered that the money be transferred to the victim within a week.