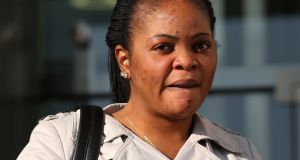 A mother-of-six has received a three year suspended sentence for her role in a complex money laundering operation involving her home country of Nigeria, Ireland and the UK.

Ojo claimed an ex-partner got her involved in the operation and that she had acted out of fear for the safety of her three Nigeria-based children.

She also pleaded guilty to dishonestly inducing another to replace one iPhone 6 Plus with a similar model at Carphone Warehouse, Millfield Shopping Centre, Balbriggan between January 24th and 28th, 2015.

She has no previous convictions.

She told Ronan Kennedy BL, prosecuting, that Ojo managed to withdraw cash using “compromised” UK bank cards from two of these accounts days after opening them.

Gardaí from the Money Laundering Investigation Unit started their investigation into the matter after receiving information about west African people targeting credit unions.

Det Garda Heaney said the parties involved would lodge money into the credit union accounts through direct debit to bypass the chip and PIN information requirement on the UK bank cards.

Then someone would show up to the premises to withdraw the cash.

The court heard Ojo used her own name to open five credit union accounts and a different name for two others. She failed to withdraw €4,800 from one account because her bank card was not the same one used to lodge the money.

On a separate occasion, a staff member at Core Credit Union in Dublin took a photo of the vehicle Ojo had been driving after another cash withdrawal attempt.

Det Garda Heaney said that Ojo claimed she got involved in the operation as a favour to an ex-partner and his friend, who were both based in Nigeria.

The detective added that gardaí discovered two iPhones in a bedside locker during a search of Ojo’s home some months later.

It was then found that the defendant had received one of them as a replacement on her insurance policy after reporting the first one lost. She failed to report that she had found the first phone.

Det Garda Heaney agreed with Carol Doherty BL, defending, that Ojo told gardaí she had been threatened that Boko Haram would be sent for her three children living in Nigeria if she didn’t get involved with the operation.

The detective further agreed that her guilty plea had been of great assistance, that it had been straightforward to identify her during the investigation and that she appeared genuinely remorseful.

Ms Doherty submitted to Judge Martin Nolan that her client, who is sole carer for her three children living in Ireland, had €1,500 in court as a token of her remorse.

Judge Nolan noted that Ojo was intelligent and knew what she was doing was wrong, but accepted that there was a good possibility she would not re-offend.

He said it would be “unjust” to deprive Ojo’s children of their mother, saying: “(Ojo) was of an age where she can reform and rehabilitate herself”.

He suspended the sentence for three years and ordered that the €1,500 in court be handed over to the gardaí.