The Jobstown trial and the social (media) justice warriors

‘It’s against the law, but we felt there is a political nature to this trial so we’d do it anyway’ 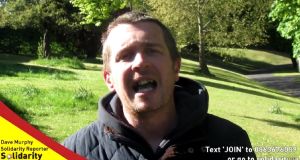 A video was introduced by Solidarity reporter Dave Murphy. 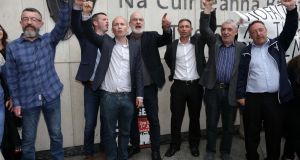 At 8.38am on Friday, April 28th last, Solidarity TD Paul Murphy shared a link to a video on Facebook.

Mr Murphy was one of a number of accused before the Dublin Circuit Criminal Court charged with the false imprisonment of Joan Burton and Karen O’Connell at Jobstown, Dublin, in November 2014, and the video he shared was a report on the first day of evidence to the trial.

The video was introduced by “Solidarity reporter” Dave Murphy, who is press officer for Solidarity, working out of the Dáil, and on the public payroll.

Ms Burton had “showed all the class prejudice of the political establishment” during her first day in the witness box, Dave Murphy said. The former Labour Party leader “went over the top as she described how terrified” she had been during the events at Jobstown.

He introduced Solidarity activist Diana O’Dwyer and asked her for her view of Ms Burton’s evidence.

“It just seemed very unreal to me, to be honest,” Ms O’Dwyer said on the video. “It completely didn’t coincide with anything I have seen of the protest or heard about the protest in all of the videos and everything that I’ve seen of it.

“She completely refused to recognise that this was a political protest,” she said, referring to Ms Burton. “She was trying to portray people there as having been a type of rabble.”

The video ended with Dave Murphy saying it wasn’t the “Jobstown not guilty” defendants who had been on trial, but rather “the Labour Party’s betrayal of the working class people was put in the dock”.

He signed off by asking people to keep on tweeting to maintain the #JobstownNotGuilty social media presence.

Over the following weeks of the trial, the Solidarity press officer produced a succession of videos which were posted on the JobstownNotGuilty Facebook page and promoted on Twitter.

No one in authority contacted him to object to his activities, he told The Irish Times.

In the run-up to criminal trials, and even more especially when they are actually under way, journalists are careful not to publish material that might influence a jury, lest it interfere with its assessment of the evidence.

Publishing material that might influence a jury can be an offence. An obvious reason for the offence, which is the offence of contempt, is to protect an accused person. Material urging a conviction, or depicting the accused in ways that might make a juror more likely to convict, creates obvious dangers.

However, material urging an acquittal is also a problem, as society generally has an interest in the fairness of the criminal justice system. Biased coverage one way or another is bad for society and it is for this reason that the offence of contempt exists.

Dave Murphy said he was aware of the law governing comment about jury trials when they were in progress. “Obviously, it’s against the law, but we felt there is a political nature to this trial so that we’d do it anyway.”

There was an appetite to find out what was going on during the trial among people who already supported the #JobstownNotGuilty campaign, he said. Also the judge regularly warned the jury not to be reading about the case in newspapers or online.

In the run-up to the trial, the judge Melanie Greally was told the Director of Public Prosecutions (DPP) was concerned that the constitutional process of trial by jury might be interfered with by a planned rally scheduled to take place that month (March). As a result, Mr Murphy and the other defendants gave an undertaking not to speak about the trial at the rally.

All through the trial Mr Murphy had a “pinned tweet” on his Twitter account referring to an attempt by the DPP to “gag” the defendants and there being a threat to the “right to protest”.

Mr Murphy’s tweets on the matter were associated with the #JobstownNotGuilty hashtag, which could in itself be viewed as prejudicial commentary. The deputy, who has 14,300 followers, was tweeting from the courtroom during the trial, including during the judge’s charge to the jury on Monday, June 26th.

“#JobstownNotGuilty now trending at number 6 in Ireland. Thanks everybody, keep it up,” he tweeted just after 2pm while the judge was addressing the jury and he was sitting in the area reserved for the accused.

He retweeted a succession of tweets by others about the case. At 2.45pm, he retweeted a tweet that referred to the judge telling the jury that some of the Garda evidence was directly contradicted by the video evidence, and questioned some of the evidence given by gardaí.

The judge, meanwhile, was continuing to address the jury.

The Irish Times does not want to suggest, and is not suggesting that any witness to the trial gave false evidence.

On Wednesday, June 28th, while the jury was out of the courtroom, Seán Gillane SC, for the prosecution, told Judge Greally it had been brought to their attention that Mr Murphy had been tweeting and publishing retweets that included “pointed references to evidence heard in the trial”.

He said steps were being taken to delete relevant material and that he just wanted to bring the matter to the judge’s attention. The judge said that if Mr Murphy had been advised “of the potential consequences of engaging in these sort of tweets at this point in the trial”, she would say no more.

By that Wednesday, tweets that Mr Murphy had published relevant to the trial were already being deleted from his account. The deletions included the pinned tweet referred to above.

Mr Murphy’s Dáil colleagues, Mick Barry and Ruth Coppinger, also tweeted about the trial while it was in progress, using the same “not guilty” hashtag.

On May 19th, Mr Barry apparently tweeted from the Dáil about a vote being taken “but the seat beside me is empty because my colleague Paul Murphy has to be in court to defend the right to protest”. Mr Murphy retweeted the tweet.

The social media commentary on the trial included numerous accusations that the coverage in the media was biased. Paul Murphy issued tweets accusing the media, including The Irish Times, of bias in its coverage. Former Socialist Party TD Joe Higgins, who was at the trial most days, also repeatedly complained of the media coverage, saying it was biased.

Early in the trial, Michael O’Higgins SC, for defendant Ken Purcell, complained about a tweet put up by Peter Murtagh, a journalist with The Irish Times, in which Mr Murtagh, referring to the cross-examination of Joan Burton, asked who was on trial. The tweet was removed. (The charges against Mr Purcell were later struck out for unrelated reasons.)

The #JobstownNotGuilty account on Twitter kept up a running commentary on the trial, regularly including abuse at not just Joan Burton, who gave sworn evidence of having been terrified by her experience at Jobstown, but also against the Garda witnesses. There were references to a show trail and a sham trial.

An account of the same name operated on Facebook. While some of the material was straight reporting of the evidence, other material was clearly prejudicial.

Videos that included commentary about the trial were posted in the run-up to and during the trial, with some of the videos receiving tens of thousands of viewers. A video on one aspect of the evidence was viewed 297,000 times while another about the coverage of the trial in the “mainstream media” received 44,000 views. A video that included Garda helicopter footage had 732,000 views. (Many of these views probably occurred before the trial began.)

One video, which had 1,200 viewers, explained that the purpose of the “campaign” was so “everyone can see for themselves the stitch-up the establishment is engaged in”.

The unidentified woman who spoke on the video appealed for funds from the public to continue the campaign.

“We are under no illusion that to win justice and the freedom of the accused in this case, we have to continue our campaign on the streets and in the courtroom,” she said.