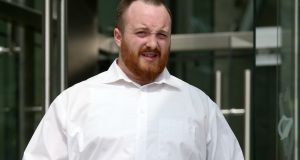 A man who stole almost €54,000 from the shop he worked in by awarding himself fake Lotto wins has been jailed for 18 months.

Paul Kavanagh (25) spent the money on take-aways, taxis and cannabis, his counsel said.

Judge Melanie Greally previously agreed to adjourn the case at Dublin Circuit Criminal Court to allow him repay €1,000 a week to the owner of the Londis shop.

However, he was unable to follow through on his intention to repay the stolen money in full as he lost his last job in security as a result of the publicity around this case.

Counsel for Kavanagh, Tom Neville BL, said he has nothing to show for the money, some of which was used to pay for his cannabis habit.

Kavanagh of Belgard Square, Tallaght, Dublin, pleaded guilty to theft from Ray Sheehan, owner of the Londis Store on Parkgate Street between 2014 and 2015.

He was also found with a small amount of cannabis at his home.

Prosecuting counsel Marie Torrens BL said Kavanagh, a father of two, began working in the shop in 2014 and started having money troubles. She said he would process lottery wins through the system and pocket the money.

The thefts came to light when the owner noticed three €150 lottery payouts on a day when the Lottery machine was broken.

Kavanagh was arrested and told gardaí that he was experiencing personal and family problems and he thought he could take the money without anyone noticing.

She also noted that Kavanagh was at a low risk of re-offending and had shown considerable insight into the effects of his crimes.

She said very few businesses could absorb a loss of such an amount. She noted that Kavanagh had a good work history and had found himself in very challenging personal circumstances.