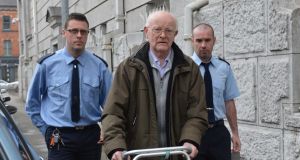 John Calnan, who is no longer in ministry, was sentenced to three years in jail, with the final year suspended, after pleading guilty to sexually assaulting a girl in West Cork in 1989. Photograph: Michael Mac Sweeney

A 76-year-old retired priest who sexually abused a seven-year-old girl while hearing her first confession has been jailed for two years.

John Calnan, who is no longer in ministry, was sentenced to three years in jail, with the final year suspended, after pleading guilty to sexually assaulting the girl in West Cork in 1989.

Sgt Maurice Downey told Cork Circuit Criminal Court that the girl was preparing for her First Holy Communion and Calnan was invited to her school to hear first confessions.

The confessions were being held in a kitchenette area and as Calnan began hearing the girl’s first confession, he put his hands inside her underwear and digitally penetrated her.

The complainant, now a 34-year-old woman, told gardaí in her statement of complaint made in 2013 that Calnan also appeared to be doing something to himself at the time.

When the little girl finished her confession, Calnan rearranged her clothing and gave her absolution and penance and told her that she could leave the kitchenette, said Sgt Downey.

When gardaí arrested and questioned Calnan about it, he said he could not recall it and when pressed he denied it happened, but now accepted it had and had pleaded guilty.

A native of Rossmore near Clonakilty, Calnan, who had served mainly in parishes in West Cork in the Diocese of Cork and Ross, has a number of previous such convictions.

He received eight years in jail for that offence, and in February 2015 he pleaded guilty at Cork Circuit Criminal Court to one count of indecent assault of a young girl.

His jail sentences are due to expire in July 2017 and the earliest possible release date for him is March 24th, 2016, Sgt Downey told the court.

He was stood down from ministry in July 1992 when the first complaint was made about him and later he spent a year receiving treatment at the Gracewell Clinic in Birmingham, he said.

In a victim impact statement read on her behalf, the complainant spoke of how Calnan’s abuse had impacted on her, but also on her parents, her husband and her children.

“When brought to the attention of the school, my family were met with denial and a feeling of guilt and shame was inflicted on them,” she said.

“There were thinly veiled warnings about speaking out and how they would be thought of within the local community.”

Defence counsel, Tom Creed SC, said Calnan was deeply remorseful and he pleaded for leniency as he hoped to live long enough to see out whatever sentence was imposed.

Judge David Riordan sentenced Calnan to three years in jail, but suspended the final year and ordered that his name be placed on the Sex Offenders’ register.

Judge gives landlord a week to halt Covid-19 parties near UCC 17:32
Brightest comet of the century visible in Irish skies for the next week 17:09
Planning permission granted for Waterford North Quays 16:55
Children who go abroad must self-isolate for 14 days before return to school in September 16:55
Covid-19: NPHET member denies trying to ‘scare people’ 16:37