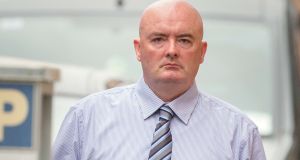 Andrew Gilmartin (47), of Drumfad, Grange, County Sligo, has pleaded not guilty to a charge of coercion. He denies compelling a woman to do an act which ‘she was lawfully entitled to abstain from’ at the Social Welfare offices in Cranmore, Sligo on April 9th, 2014. Photograph: James Connolly

A Department of Social Protection official has denied asking a woman caught claiming social welfare while working, for oral sex in return for getting her out of trouble.

Andrew Gilmartin (47) of Drumfad, Grange, Co Sligo, has pleaded not guilty to a charge of coercion. He denies compelling a woman to do an act which “she was lawfully entitled to abstain from” at the Social Welfare offices in Cranmore, Sligo on April 9th, 2014.

The woman, a mother of four, wept as she told Judge Keenan Johnson and a jury of six men and six women that the accused had become angry during an interview in a department office in Sligo.

She said she received a letter from Revenue in April 2014 stating that they knew she was signing on and working. She misplaced the letter and decided to go into the social welfare office to sort out the matter. The woman said she was there at 9am as she wanted to be first in.

The court heard Mr Gilmartin called the woman into an interview room and she told him she needed help as she was “in a bit of trouble”. She told him she had been signing on for five or six weeks and he said they would be able to sort it out.

He asked her was there anything else she wanted to tell him, and when she said she was back in education, he got angry. She said the accused told her this was more serious and that it was fraud.

He left the room for a few minutes and when he came back in he locked door on his side. He leaned across the desk and locked the door on her side.

The woman said the defendant was pacing with his hands in his pockets and seemed in deep thought.

She said that after a couple of minutes he said he would help her “but we would have to keep it between himself and myself”. He then said he would pull a few strings “to get me out of the trouble I was in” and she thanked him.

The woman told Dara Foynes BL, prosecuting, she had told Mr Gilmartin she was in financial trouble. It was her son’s birthday and she had wanted to get him something.

The woman told the jury the accused asked “what would I do for him”, which she ignored. “I knew something was wrong,” she said.

The woman said the accused paced up and down for a while and got angry and asked “what I was going to do for him not to prosecute me”.

“He sat down, with his feet up on the table and put his hand behind his head,” the woman said.

She said after going quiet the accused said “here’s how it is going to happen. You are going to give me a blow job”. The woman said she replied no I am not.

She said she unlocked the door and kept on running until she got to Dunnes Stores, where she rang her partner.