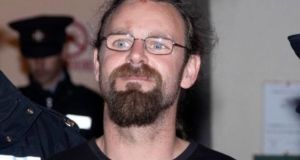 A new charge of capital murder was brought before Friday’s sitting of Castlerea District Court in the case of Stephen Silver (44), accused of murdering Detective Garda Colm Horkan in Castlerea last June.

Detective Garda Colm Horkan (49), who was based in Castlerea Garda station, died on June 17th at the junction of Main Street and St Patrick Street in the town after he was shot while responding to an incident in the town.

The accused, of Aughaward, Foxford, Co Mayo had been on remand since the incident. Mr Silver appeared before Friday’s morning’s sitting where he was remanded in custody to the Midlands Prison, Portlaoise where he will appear via video link before Harristown Court on December 4th.

The accused was brought to the court sitting amid a heavy Garda presence. He was wearing a grey jacket, a white opened necked shirt, grey slacks and had his hair tied back.

The accused was arrested and charged with the new offence at 11.29 a.m. this morning by Garda Helen Gillen of Castlerea Garda Station. The accused made no reply to the charge of capital murder.

Superintendent Tom Colsh told the court this was a new charge and said the earlier charge of murder against the accused remained “but may be withdrawn” at a later date.

Supt. Colsh said he hoped to have directions in respect of the Book of Evidence before next Friday’s sitting.

Judge Alan Mitchell granted an application for legal aid in respect of the new charge to the accused’s solicitor, Gearoid Geraghty.