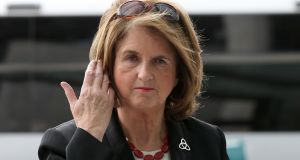 Joan Burton was asked on Thursday if she had attempted to ‘smear’ the people taking part in a protest at Jobstown in a tweet. Photograph: Collins

Women politicians shy away from social media because they come in for a huge amount of “vile abuse” on it, the former leader of the Labour Party, Joan Burton, has told the trial of Solidarity TD Paul Murphy and others, on her fourth day in the witness box.

Ms Burton, who has now finished giving evidence, was being asked if she had attempted to “smear” the people taking part in a protest at Jobstown, Dublin, by suggesting her assistant issue a tweet saying there were children “free to roam” on the streets with no-one minding them and that this was “shameful.”

She agreed with Michael O’Higgins SC, for defendant Ken Purcell, that social media can be a useful way for politicians to get a story out to the public but added that there was a problem with women and how they are treated on social media.

A lot of women politicians restrict their use of social media because of the “vile abuse” they are subjected to. She has people “clean up” her social media before she sees it.

The court was played a video of Ms Burton inside a Garda jeep with her assistant Karen O’Connell during which Ms Burton is heard suggesting Ms O’Connell should go on social media and tweet about the presence of unsupervised children.

Mr Murphy, of Kingswood Heights, Tallaght, is accused of the false imprisonment of Ms Burton by restricting her personal liberty without her consent on November 15th, 2014, at Fortunestown Road, Jobstown, Co Dublin. He is also accused of a second charge in relation to the same offence against Ms O’Connell.

Also facing the same charges are: Kieran Mahon, Bolbrook Grove, Tallaght, and Michael Murphy, Whitechurch Way, Ballyboden, both of whom are Solidarity councillors with South Dublin County Council; Scott Masterson, a self-employed courier, of Carrigmore Drive, Tallaght; Mr Purcell, a precision operative, of Kiltalown Green, Tallaght; Frank Donaghy, a retired construction worker, of Alpine Rise, Belgard Heights, Tallaght, and Michael Banks, of Brookview Green, Tallaght, whom the court was told does not have an occupation that brings him into contact with the public.

All the defendants have pleaded not guilty to the charges.

Ms Burton has said she and Ms O’Connell spent three hours in two Garda cars with a crowd around them restricting their movement.

At one stage Ms Burton was asked if she could identify Mr Murphy in a video that showed him naked from the waist up after his top had been pulled off in a confrontation with the gardaí.

“If you can identify him for me. I haven’t seen him with his clothes off before,” Ms Burton responded, to laughter in the court.

Mr O’Higgins said the suggestion that Ms O’Connell go on social media was motivated by a desire to influence people to think the event at Jobstown was “outrageous”.

Ms Burton said counsel was attributing powers of strategising to her which she certainly did not have when “locked in the back of the car” with people banging on it and rocking it and her not knowing what would happen if the doors of the car were opened.

“I will acknowledge that I was not at my most thoughtful, strategic best,” she said.

Mr O’Higgins said the purpose of the suggested tweet was to “paint a picture to people that this was an uncaring bunch of people who didn’t even supervise their children.”

Ms Burton said she had no idea who the children belonged to. She said she did not follow up on the suggestion and did not know if the tweet ever happened.

Ms Burton said if it was being suggested that she felt anger towards the protesters then the answer was yes. “I was a very frightened person.” Her state of mind at the time was “very fragile and frightened”.

On occasion Mr O’Higgins said Ms Burton’s answers were not addressing his questions and asked her to “please, please” answer the question she had been asked. Judge Melanie Greally twice intervened to ask the witness to address the specific question asked.

When being asked about her understanding of the use of Twitter to drive media agendas, Ms Burton referred to the president of the United States Donald Trump, as a “master Twitter operator” and said people had learned a lot in recent years about the operation of social media.

She said Facebook has become “a very sad place” in recent times such that women didn’t get involved in it to the extent that we might want to.

The court heard Ms O’Connell sometimes operated Ms Burton’s account. Mr O’Higgins said it had 18,000 followers and was used to make political tweets. Ms Burton said she got a person in her office to issue tweets. The vast bulk of the tweets were about what she was doing on a particular day.

She said her use of Twitter was moderate when compared with other politicians after Mr O’Higgins said she had given misleading evidence to the jury about the extent to which she used Twitter for political purposes. She said she didn’t use Twitter for personal reasons because of the trolling, which is “very, very difficult”.

The court was shown video footage of Ms Burton emerging from a Garda jeep and beginning to walk away before being hurried to another car by gardaí. In earlier evidence Ms Burton had spoken of getting out of the jeep and “legging it” and feeling as if she was running for her life.

Mr O’Higgins asked if it might not have been more appropriate to have said she got out of the car and walked. Ms Burton said she was honoured to serve her country as Tánaiste and had tried to keep her composure and dignity during the event.

When the part of the video where Ms Burton was being hurried away was playing, people could be heard shouting “shame on you, you’re a f**king disgrace.”

Ms Burton began to cry and asked if she could view the video on her own. “It was very, very distressing what happened,” she said. Judge Greally asked the court be cleared.

Later, responding to Sean Gillane SC, for the prosecution, Ms Burton said she had been in public life since 1991 but had never experienced anything like she experienced that day.

Ask if being called “a c**t” and “a bitch” was part of political discourse in her experience, she said no.

“I find that in general people are very kind to me.”

People like her, from working class backgrounds, don’t use that sort of language, she said, particularly to women.