‘I am frightened of so many things now,’ says victim of male attacker 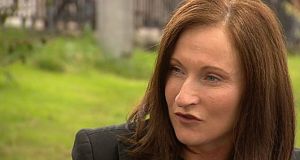 One of the victims of a man jailed for 18½ years on Thursday for random attacks on women in Dublin has said she fears she will never recover from the event.

Ruth Maxwell, who had just started a new job in Dublin city when the attack took place in May 2016, told Dublin Circuit Criminal Court: “I am frightened of so many things now... I can see who I used to be but I’m not sure how to get back to be that person.”

Reading her victim impact statement to the court, she said that she suffered a life changing injury to her hand when fighting off the knife attack. She said she has cried so much for the loss of her hand.

Ms Maxwell, was walking to the Luas to go to work, when the man - who cannot be identified for legal reasons - put a hunting knife to the woman’s throat. She told the court that she thought the man was going to slit her throat and she grabbed the blade to stop that happening, causing the knife to cut tendons in three of her fingers.

She managed to get out from under the knife and began screaming and he ran off.

The assailant, a 34 year old father of two, was jailed for 18½ years on Thursday for carrying out the premeditated random attacks on her and two other women over a five year period.

Victim impact statements were submitted by the two other victims, who cannot be identified for legal reasons.

The victim of the first attack in September 2011 said the first few days afterwards were a blur due to shock and trauma.

She said she found it hard to sleep for months afterwards and friends had to stay with her. The attack took place very close to her home she could not look out her windows during the day time.

She suffered from black eyes and a broken nose and did not leave her house for some time afterwards because of her injuries. When she returned to work she was told to take more time off because her appearance would make clients uncomfortable.

She said she would not consider walking home at night now and was now constantly looking over her shoulder. She thanked Garda Joseph Maguire, now retired, for his assistance and for his advice on how to build up confidence back up.

The complainant in the second attack in 2015 suffered extensive bruising and scrapes to her face and body. She told the court she had to take HIV medication as a precaution. She suffers extreme anxiety which had affected every aspect of her life.

She said she had gone from being laid back and carefree to being hyper vigilant and nervous. She had continuing nightmares and disturbed sleep. She said she didn’t walk alone in the dark anymore and felt endangered.

“I know how hard I fought when he attacked me. I thought I was going to die and I remember feeling it might be for the best,” she stated.

She said she had to resume counselling during the trial because it made her relive the trauma of the attack.

“It has set me back in every aspect of my life. I detached from everyone around me, I isolated myself and felt completely alone.

“I am uncomfortable in social settings and get very anxious. I feel very angry at being deprived of being how I once was,” she said.

Ms Maxwell told the court that where once she enjoyed physical activities now she felt like her spirit was broken and she believed the physical and emotional pain would manifest for rest of her life. She said she no longer felt safe to go running or training early in the morning, an activity she used to get a lot out of before the attack.

“I cried a grieving cry for the loss of functionality of my hand. I have cried so much for all the loss that I feel and at one point I thought I would never stop crying.

“I am frightened of so many things now. I’m especially frightened for my daughter and granddaughter.

“Before the attack I was optimistic but now if I haven’t heard from my daughter for a day I jump into fear and all the awful things that could have happened to her.

“Even though I know rationally this is unlikely and I understand where my fears are related to, I am paralysed by them.

“My spirit is broken and I’m afraid of people and crowds. The physical and emotional hurt and pain has continued for two years and will probably continue to manifest itself in some form daily for the rest of my life...

“I can see who I used to be but I’m not sure how to get back to be that person. I feel very fractured — a bit like my hand — not being able to get a good grip on things.

“I do not feel good about myself, I do not feel confident anymore in any of my roles in life — whether that’s a mother, a grandmother, a woman, a friend, a partner an employee. This is in fact the biggest impact of the attack.”