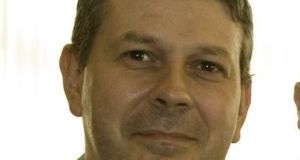 Mark Dalton, who forged the name of Ceann Comhairle Seán Ó Fearghaíl on almost 300 cheques to steal €202,066 from a voluntary housing association in Co Kildare, was jailed for three years at Dundalk Circuit Court on Thursday.

A former parliamentary assistant and county councillor who forged the name of Ceann Comhairle Seán Ó Fearghaíl on almost 300 cheques to steal €202,066 from a voluntary housing association has been jailed for three years.

Father of two Mark Dalton (52), with an address at White Castle Lawns, Athy had previously pleaded guilty to 14 sample charges of theft and 14 sample charges of forgery between May 1st 2009 and August 26th 2014 while manager of the Cill Urnaí Housing Association in Co Kildare.

Passing sentence at Dundalk Circuit Court, Judge Martina Baxter told Dalton he had betrayed the trust of his electorate with his “egregious duplicity”.

The earlier hearing was told the defendant stole the money to feed a gambling habit which had spiralled out of the control. None of the cash was recovered.

The court heard that Dalton, a former Fianna Fáil member of Athy Municipal District and Kildare County Council, was responsible for hiring tradesmen to carry out work for the housing association. He was the co-signatory with Mr Ó Fearghaíl on cheques for this work and for making payments for other bills.

Judge Baxter was told that while the defendant detailed these payments on the stubs of the association’s cheque book, he forged Mr Ó Fearghaíl’s name on the cheques and then made them payable to himself.

The alarm was raised when the manager of AIB in Athy became concerned about the cheques being cashed and Mr Ó Fearghaíl, for whom Dalton worked as a parliamentary assistant, confirmed some of the signatures were not his.

Mr Ó Fearghaíl confronted Dalton and later dismissed him from his job.

The court heard the defendant subsequently attended residential treatment and counselling for his gambling addiction and was now in employment.

Character references from former EU Commissioner Charlie McCreevy and ex-TD Sean Power were given to the judge. Both described Dalton as a competent community worker and expressed shock at what he had done

Judge Baxter said Dalton’s offending was well thought out and planned as many of the cheques were made out for sums ranging for €280 to €800 and designed not to attract attention.

The judge also noted that during the period of his offending Dalton had managed to run a successful campaign and was re-elected to Kildare County Council in May 2014.

“He clearly had the wherewithal to carry out a successful campaign while stealing the money,” said Judge Baxter.

The judge noted some of the forged cheques had been written after his re-election and was told Dalton later resigned from the council in October 2018.

Judge Baxter said she accepted the defendant’s remorse and shame was genuine but added she was disappointed that he had made no effort to repay any of the money.