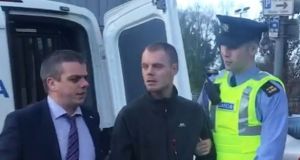 Stephen McDonagh (centre) has been jailed over the hijacking of a minibus from outside Dublin Airport early last year. File photograph: Cate McCurry/PA Wire.

Two cousins have been jailed for their roles in the hijacking of a hotel courteousy minibus at Dublin Airport last year.

Cavan Circuit Court heard the theft prompted a high-speed chase across five counties during which two Garda vehicles and a PSNI car were rammed.

Stephen McDonagh (26) and John McDonagh (27), both of The Steeples, Navan, Co Meath, appeared before Judge John Aylmer via video-link on Friday over the taking of the Carlton Hotel minibus from outside Terminal 2 at Dublin Airport on January 8th, 2020.

Three tourists — a Columbian national living in Germany and two English teenagers returning from a scout trip in America — were on the bus when the defendants found the keys in the ignition and drove off along the M1 towards Belfast.

Stephen McDonagh previously pleaded guilty to six charges — one of unlawfully taking the minibus, three of false imprisonment, one of reckless endangerment of gardaí and one of taking another vehicle at an address in Broomfield.

John McDonagh pleaded guilty to five charges — three of false imprisonment, and two of knowingly being a passenger in a stolen vehicle.

The passengers were let off near the CityNorth Hotel and Conference Centre at Julianstown, some 30 minutes from Dublin Airport, and the minibus continued along the M1. The pair encountered garda patrols at Balbriggan, who kept track of the vehicle’s movements with assistance from the Air Support Unit.

The court heard the defendants drove the bus at speed at Garda patrol vehicles attempting to halt them before exiting the motorway near Dundalk.

The minibus collided with a Garda SUV on the N2 near Dundalk and, after crossing the border at Cullaville, it struck a PSNI car.

The cousins abandoned the vehicle after hitting a ditch at Broomfield and then stole a Seat Ibiza from outside a house. This car was used to ram a pursuing Garda vehicle, at which point the chase came to an end and the pair were arrested.

The three bus passengers told gardaí afterwards that being on the stolen bus was like being part of a TV police chase drama. They described the defendants as having acted like “bandits” and said the ordeal has had a lasting impact on their well-being.

Counsel for the McDonaghs said the taking of the minibus was “opportunistic” in nature and there was no suggestion of violence or threats towards the passengers.

The judge sentenced John McDonagh to four years for each of the three false imprisonment charges, four years for knowingly being a passenger on a stolen bus and 2½ years for being carried in the stolen car.

All terms are to be served concurrently and the men were given credit for time already served.