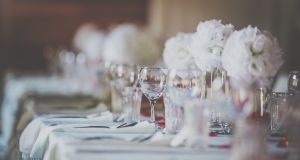 A child who fell off a stage at a wedding in a Co Donegal hotel has been awarded €35,000. File photograph: Getty Images

A child who fell off a stage at a wedding in a Co Donegal hotel has been awarded €35,000.

The boy, who was aged just four at the time, suffered the accident at the Strand Hotel in Ballyliffin on September 9th, 2017.

The child appeared with his parents at Letterkenny Circuit Court where details of the incident were heard.

Barrister Peter Nolan told the court that the child fell off a stage during the wedding and suffered a laceration.

He was rushed to Altnagelvin Hospital in Derry, where he was treated on the night.

Mr Nolan read reports from two plastic surgeons whom the child has been attending.

Both said that a scar, which is around the child’s eyebrow, is visible but is expected to heal well.

He said he was happy to recommend that compensation of €35,000 be paid by the hotel. He also recommended €846 in special damages.

Judge John Aylmer said he was happy to recommend the sum for the child.