Award to woman knocked down crossing Dublin street increased to €372,000 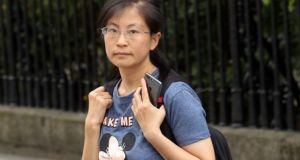 A €256,000 award made to a woman who was knocked down while crossing traffic-light controlled junction in Dublin city centre has been increased to €372,000 by the Court of Appeal (CoA).

Cheng Zhang (37), who is from the Liaoning province of China and first came to Ireland in 2003 to study, was awarded €256,000 by the High Court in 2018 against the driver of the car, Stephen Farrell, of Shelbourne Park Apartments, Ringsend, Dublin.

The High Court made a total award of €465,000 but reduced it on the basis that Mr Farrell was 55 per cent responsible for the accident and Ms Zhang for the remainder. This was because Mr Farrell had a green light in his favour while Ms Zhang crossed when the pedestrian light was red.

The court found there was no speed involved in the driving but Mr Farrell should have kept a proper lookout as he was making the manoeuvre.

Ms Zhang appealed both the apportionment finding and the amount of the award. She claimed liability should have been determined 100 per cent in her favour and that the damages awarded were insufficient.

In her action, she claimed she was crossing at the junction of Merrion Row/Merrion Street Upper on April 17th, 2011, when Mr Farrell’s car, which was turning left from Merrion Street, hit her.

Thrown in the air

The court heard she was thrown in the air and suffered injury to her knees and pelvis and a blow to the head. She was unable to move or communicate for about an hour after the accident.

She claimed she went on to develop severe and persistent mental illness in the form of post traumatic stress disorder as well as the condition fibromyalgia.

Ms Zhang, who was initially represented by lawyers in the case and later represented herself, argued in her appeal that the High Court should have viewed a CCTV clip which had been omitted in error and, had it done so, would have come to a different conclusion on liability.

She also argued before the CoA there was no evidence or CCTV footage, taken from Government Buildings, showing her pedestrian light was red as she was crossing and the High Court judgment on liability was therefore unfair.

Dismissing her appeal on behalf of the three-judge CoA, Mr Justice Seamus Noonan said she was mistaken and perhaps “labouring under a misapprehension” as she was a personal litigant.

Although the trial judge may not have viewed the particular clip referred to, there was more than ample evidence from both sides as to what it showed, he said.

The evidence of her own engineer was that the lights on Merrion Row were green in the defendant’s favour as he approached them and turned to amber as he commenced making his turn into Merrion Street Upper.

Mr Justice Noonan said he had viewed the footage and was perfectly satisfied it did not show Mr Farrell breaking the red light as Ms Zhang suggested.

There was accordingly no basis whatsoever for impugning the findings of fact of the High Court judge, less still any basis for a suggestion that those findings were unsupported by credible evidence.

The CoA was satisfied the High Court’s overall award should not be disturbed.

However, in relation to the share of liability, Mr Justice Noonan said the High Court apportioned only marginally more responsibility to Mr Farrell than to Ms Zhang.

In his view, the magnitude of Mr Farrell’s negligence was of a much higher order and he must bear the overwhelming responsibility for this accident.