Witnesses, snapshots and voices from the Circuit Criminal Court 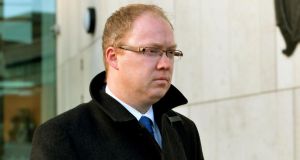 SNAPSHOTS
– Michael O’Sullivan said he was shocked when he heard the extent of businessman Seán Quinn’s bet on Anglo shares through contracts for difference. “We had a very good working relationship with Quinn Group. It was news to me, someone holding that level of shareholdings in the bank was a huge surprise. ”


– Mr O’Sullivan said he was told in November 2007 that the financial regulator was “aware” of the CFD (contracts for difference) position.


– On May 8th, 2008, Mr O’Sullivan said, he accompanied Pat Whelan to a meeting with Con Horan, prudential director at the financial regulator, at the regulator’s office on Dame Street in Dublin. At this meeting, Mr Whelan outlined in detail the bank’s strategy on matters such as securities, funding and reducing the Quinn family exposure through asset sales. “I would have thought it was a positive meeting,” the witness said. “Everything I knew at that point was discussed by Pat Whelan and Con Horan.”

For much of the meeting they had been discussing ways to reduce the risk the bank was exposed to over the Quinn Group; in his view, releasing the guarantee would increase that risk.


– Mr O’Sullivan said he became “annoyed” during an Anglo asset review in October 2008 as it appeared the board of the bank was not aware that the terms of the “Maple 10” loans had been altered earlier that month. Mr O’Sullivan said he told the bank’s chief financial officer, Matt Moran, about his worries on December 21st. He said he subsequently received a call from Mr Whelan and that they had a “heated exchange” about his move. “I felt compromised by what had taken place and that hadn’t happened in my 26 years in financial services,” he said.

– Lorcan McCluskey told the court he received “effectively a Mayday call” on St Patrick’s Day 2008, when he was told to return to the bank’s head office on St Stephen’s Green in Dublin to effect a €20 million money transfer to cover margin calls on businessman Seán Quinn’s contracts for difference (CFDs). The trial had previously heard that on March 17th, 2008 – referred to as the St Patrick’s Day Massacre – the value of Anglo’s shares fell by 30 per cent.


– Addressing the schedule for the coming months, Judge Martin Nolan told the ju-ry that the trial would break during Easter, from April 15th to April 22nd. However, he warned jurors that if the trial was near the end at that stage, they might keep going, “so I wouldn’t advise you to book any holidays.”


VOICES FROM THE COURT


Unfortunately, yes
Mr O’Sullivan, who worked at Smurfit Paribas until it was taken over by Anglo in 1999, when it was pointed out that he had “brought Quinn with you” to Anglo. Seán Quinn was formerly a client of Smurfit Paribas

We were speechless
Mr O’Sullivan, recalling how he and Pat Whelan reacted when the financial regulator apparently suggested the bank consider releasing the Quinn Group from a €250 million guarantee


I wouldn’t advise you to book any holidays
Judge Martin Nolan, addressing jurors