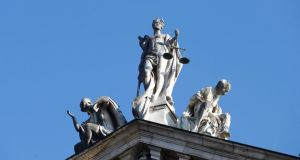 Gerry Walshe, an electrician, of Lisdeen, Co Clare, is seeking a stay, pending the outcome of his appeal, restraining the issuing of the necessary certificate verifying the referendum result. Photograph: Michaela Rehle/Reuters

An application for a stay aimed at restraining the issuing of a certificate verifying the result of the same-sex marriage referendum was adjourned until Thursday at the Court of Appeal.

Gerry Walshe, an electrician, of Lisdeen, Co Clare, wants to appeal last week’s refusal by the President of the High Court, Mr Justice Nicholas Kearns, of permission to Mr Walshe to bring a petition challenging the May 22nd referendum result.

The proposal allowing for same-sex marriage was supported by 62.07 per cent of voters.

Mr Walshe is seeking a stay, pending the outcome of his appeal, restraining the issuing of the necessary certificate verifying the referendum result.

When the matter came before Mr Justice Peter Kelly, the judge, after being told an appeal had been lodged and served on the State, adjourned the matter to allow Mr Walshe, representing himself, amend his notice of appeal.

Mr Justice Kelly said while Mr Walshe’s intention was to appeal the decision by the President of the High Court the paperwork lodged with the court indicated he wished to appeal an earlier procedural decision by Ms Justice Mary Faherty.