Brexit would have ‘profound political significance’ for North, court hears 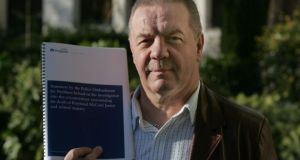 Victims’ rights campaigner Raymond McCord, who is challenging the constitutional authority of the British government to take Northern Ireland out of the European Union . File photograph: Matt Kavanagh/The Irish Times

Executing Brexit would be an “act of profound legal and constitutional as well as political significance” for Northern Ireland, Belfast High Court was told on Thursday.

In the final day of the three day judicial review, a lawyer challenged the argument made by lawyers for the British government and the Northern Executive, that quitting the European Union would have no impact on the 1998 Belfast Agreement.

David Scoffield, QC, who is representing a group of politicians and human rights groups, said that the “North-South machinery” of the agreement was “designed and required to implement EU policies and programmes”.

That would make “no sense” if Northern Ireland was no longer a member of the EU, said Mr Scoffield.

In winding up his argument, Mr Scoffield said that the triggering of Article 50 by the British government to begin taking the United Kingdom out of Europe would be an “act of profound legal and constitutional as well as political significance”.

Mr Scoffield referred to how Tony McGleenan, QC, acting for the British government, had argued that after the EU referendum result that the “ship had sailed” in terms of Brexit. Mr Scoffield said however the ship “has not sailed” until Article 50 was triggered.

He contended that it was for the Westminster parliament, rather than the British prime minister by ministerial prerogative power, to activate Article 50 as is scheduled to happen by the end of March next year.

“Article 50 once it is triggered there is no way back as far as Northern Ireland is concerned,” he said.

He added that Mr Brokenshire’s role “was to speak for Northern Ireland’s interests and to do so he must be properly informed”.

A number of legal challenges to the Brexit vote are also taking place in Britain. These could be relevant to the ultimate determination of High Court judge Mr Justice Maguire who is hearing the case. He said the court was likely to reconvene at a later stage.

Victims’ campaigner Raymond McCord, whose son Raymond junior was murdered by the Ulster Volunteer Force in 1997, is also a party to the judicial review.

His lawyer Ronan Lavery, QC, argued that as a result of the Belfast Agreement, Northern Ireland has special constitutional status within the United Kingdom.

He said that when the British and Irish governments endorsed the Belfast Agreement of Good Friday 1998 they signed up to the people of Northern Ireland having a “veto” over any change to the constitutional position of Northern Ireland.

Taking Northern Ireland out of the EU without consent would breach that veto, he contended.

Outside the court on Thursday, Mr McCord said he was “delighted” with the way his case had proceeded and he believed his legal team had presented a strong constitutional case.

“I believe the court has the power to say that Brexit can’t go ahead in Northern Ireland,” he said.

Mr McCord said that 56 per cent of people in Northern Ireland voted to remain in the EU and that vote must be respected. He took his case on behalf of his son and on behalf of other victims, he said.

“I think justice is better served by being in the European Union. Europe has helped victims of this country and has helped people to come together as well,” he added. “I don’t believe the British government would help victims the way Europe has.”