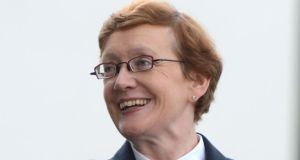 The State needs to “inject systemic resilience and accountability” into its corporate criminal law and address the “strong public perception” that white-collar offences do not lead to appropriate punishment, the Attorney General has said.

In a speech on law reform in Dublin, Máire Whelan said it was “injurious to democracy” if a perception was allowed to persist that white-collar offences were not amenable to appropriate criminal sanction.

“It is vital that we understand the deficiencies that exist and the legislative and other impediments that have led to a strong public perception that we lack responsive capabilities and appropriate sanctions,” she said.

“As we move towards regaining our economic sovereignty, it is imperative that a robust and comprehensive review is carried out so that, insofar as possible, we can proceed to inject systemic resilience and accountability into our corporate criminal law.”

Ms Whelan was speaking at the launch of the Law Reform Commission’s fourth work programme, which will include a study on reform of corporate offences.

She suggested the commission might evaluate how section 184 of the Australian Corporations Act 2001 has worked. This was introduced to curb recklessness or intentional dishonesty on the part of company directors.

Regulators
Ms Whelan welcomed the commission’s decision to look at the powers and functions of regulators, remarking that regulatory enforcement had the potential to be a catalyst for reform “if provided with adequate investigative tools.”

On the controversial issue of sentencing, she stressed the importance of “consistency and coherence of approach”. While there was a statutory basis for suspended sentences, the experience in the Court of Criminal Appeal suggested “there are a number of potential legal issues that need to be addressed to make this sentencing option fit for purpose.”