Adams challenged over the murder of Jean McConville

Taoiseach urges anyone with information about the ‘Disappeared’ to contact authorities 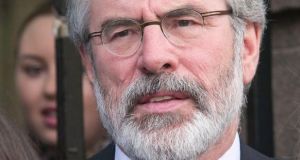 Following a special documentary on the so-called Disappeared shown on RTÉ television last night, Mr Adams has been criticised over his appeals for people to come forward.

A tweet from the Sinn Féin leader last night urged anyone with information to “contact the commission, families or me”.

Mr Kenny challenged Mr Adams over his knowledge of the Disappeared and said the people with information about Ms McConville’s death are “still around”.

“The fact of the matter is that somebody ordered that Jean McConville be murdered,” Mr Kenny said.

“It may well be that those people are still around and they know what happened, and your own appeal from this may well have some effect, and I hope it has.”

At least 16 people were abducted, murdered and secretly buried by republican paramilitaries between 1972 and 2003. Ms McConville was one of them. She was taken from her home in Divis, west Belfast in 1972 at gunpoint.

Even though a former IRA boss claimed Mr Adams ordered her murder, the Sinn Féin president has continued to insist that he had nothing to do with the young mother’s death, most recently in last night’s documentary.

Brendan “Darkie” Hughes, once a close friend of Mr Adams, said: “There’s only one man who gave the order for that woman to be executed. That man is now the head of Sinn Féin.”

But, Mr Adams, now a Louth TD, told the documentary makers: “I had no act or part to play in either the abduction, the killing or burial of Jean McConville or indeed any of these other people.

Mr Hughes died in 2008 and Old Bailey bomber Dolours Price, who died earlier this year, also made the allegation against Mr Adams.

Mr Adams has always denied being a member of the IRA.

Ms McConville’s remains were recovered at Shelling Beach, Co Louth in August 2003 - more than three decades after she was abducted - by a member of the public. She had been badly beaten and shot in the back of the head.

Her murder is a live investigation because a man out walking made the discovery rather than information coming from the IRA.

To date the bodies of 10 people have been recovered.

Mr Adams repeated calls in the Dáil for anyone with information on The Disappeared to co-operate with the Independent Commission for the Location of Victims’ Remains (ICLVR).

The body was jointly established by the British and Irish governments in 1999 and guarantees that all information given is treated anonymously.

The Taoiseach said he hopes the programme “stimulates active minds” to make their information available.

“For others who are disappeared in a similar fashion, if they are laid to rest in tragic circumstances in Co Meath or Co Monaghan, there are people out there who know what happened to them as well, and it’s time that they would engage with the Commission set up by the last Government for this purpose,” he said.