Through the roof: the cost of keeping a household going

The cost of running an Irish household is up on last year. And that’s before you start eating 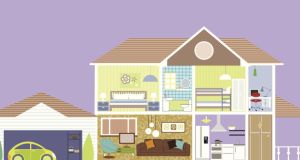 It costs an estimated €49,000 per annum to run the average Irish household

While a net income of just under €50,000 might sound like a lot of cash, it can be burned through very quickly by families trying to keep the wheels on the wagon.

When all household bills are totted up, including food, mortgage payments, utilities, insurance and motoring costs – but excluding luxuries such as holidays or school fees – the cost of living for those who bought modest homes during the boom years now nudges €49,000, according to independent figures compiled by this newspaper and the second annual cost-of-living survey published this morning by AA Home Insurance.

According to the AA figures, the average annual cost of owning and maintaining a home in Ireland, based on today’s house prices, is €15,655 but if you are one of the negative-equity generation and bought a home at the height of the boom in 2007, the story is much bleaker, and you will have to find about €22,133 after tax every year to keep things going.

This is a 2 per cent increase on last year. And the AA’s figures, while comprehensive, do not include food, clothes, running a car, entertainment or many other expenses considered normal by most people.

A homeowner who buys a house today at the current average market price of €170,000 will spend just over €9,000 on mortgage repayments next year, according to the latest research, but someone who bought in 2007 and paid the then average price of €344,000 with a 92 per cent mortgage will need to find €15,700.

The AA has identified repair, maintenance and contingency costs as the next biggest single cost faced by Irish homeowners after mortgage repayments. It says the average homeowner will need to spend or set aside €1,275 over the next 12 months to keep up with wear and tear.

Heating and electricity bills come to €2,307 for a typical three- or four-bedroom detached house compared with €2,234 last year.

The AA has also factored in the cost of repair and replacement of household appliances, and it is set this year at €505, compared with €662.03 last year. The estimated cost for cleaning products this year is €312, up slightly on last year’s figure. Also among the fixed charges in the AA’s study are TV licences, which are steady at €160.

There has been a big increase in property tax, with the household charge of €100 being supplanted by an average Local Property Tax of €315, to which the AA has added its Home Rescue policy of €88 – obviously, unlike the tax, you don’t have to pay it.

Better news
On a more positive note, the AA survey points to ways in which people can save. It involves shopping around. According to AA, there is nearly €200 difference between the annual cost of gas with the dearest provider (Bord Gáis Energy’s standard rate), and the cheapest (Flogas) when you pay by direct debit.
The AA also worked out the cost of 10 appliances based on the average price in three retailers – Harvey Norman, Power City and DID – and across three brands. A vacuum cleaner will cost you an average of €42.21 a year to run, up marginally on 2012. A dishwasher will set you back €71.86, again a small increase on last year.

The cost of owning a TV has fallen sharply, with the annual cost put at €144 compared with €191 last year – assuming you replace it every five years. On top of that, however, the AA puts at €333 the average cost of UPC and Sky. UPC will cost €342, while a similar Sky package will set you back €324.

You might also be interested to learn that a year’s supply of dishwasher tablets will cost €27, while kitchen cleaning spray will set you back nearly €50 and another €8.50 will go on Mr Sheen. When all cleaning products are accounted for, the average annual bill is €313, up €13 on last year.

When the final tally is done on the AA figures, the household spend is €22,133 for the boom-buyers and €15,655 for those with the average mortgage today.

“The figures are scary when you itemise everything,” says Conor Faughnan of the AA. “Each of the items that we pay for are familiar but, when you add them all up, it is small wonder that so many households are struggling financially.”

Even worse, it takes more than household spending to stay alive. A lot more.

LEST WE FORGET . . . OTHER COST-OF-LIVING EXPENSES
When we carried out this exercise last year we worked out that a further €25,833 was needed to cover the expenses not covered by the AA, including food and many other living expenses. We used as a guide the Standard Financial Statement that banks ask customers to fill in if they are trying to restructure debts. Among the costs covered are health insurance, transport expenses, food, clothes and grooming, entertainment, childcare, education and mobile phones. So, how are those costs bearing up this year?

The cost of comprehensive insurance for two adults depends on many factors, notably location, driving history, no-claims bonus and type of car, but our notional family would have little change out of €800.

The average age of a car in Ireland is more than seven years, so annual motor tax based on engine-size for a 1.6-litre mid-sized, fairly modern car will be €478, while at least €400 will have to be put aside to cover servicing and maintenance. If you spend €10,000 on a car, keep it for five years and then sell it for half the price you paid for it, the annual cost is €1,000, which takes the total running costs to €4,613 – down slightly on last year.

Social inclusion €4,056
When the Irish Insolvency Service published its expenditure guidelines earlier this year, it allowed €29 a week for an adult for “social inclusion” or social life. If we allow just €10 to cover each child each week, the annual spend on social inclusion comes to €4,056.

Mobile phones €940
There is a dizzying array of mobile phone packages on offer. While bill-pay tariffs can start for as little as €17 per month, the average Irish mobile phone user’s monthly bill is substantially more than that, and it will come as little surprise that we pay a lot more than the EU average to talk.

Education and childcare €6,700
According to Barnados, the average back-to-school costs for a child in fourth class is €400, while a child in first year will set parents back €785. We will allow a further €500 to cover costs for trips and extra curricular activities. Assuming our notional household has two children in primary school, the annual education cost climbs to €1,300.

Schools in Ireland are obliged to open for 183 days a year, so if both parents are working, then after-school childcare costs will have to be added to the bill. Our notional family have found themselves a childminder who charges €150 per week for the school year of 36 weeks which is a total each year of €5,400. Combining that and the education costs, the total spend rises to €6,700.

Clothes/grooming €1,400
Assuming the man in our notional household visits the barber eight times a year and his partner visits the salon once every 10 weeks (plus once for a special occasion), the total cost of hair care alone will reach €800. If the family then spends just €50 a month on clothes, the amount needed rises to €1,400.

The total spend, then, without much by way of luxuries or treats, no holidays and absolutely no medical or dental bills, reaches €26,965. Add that to the costs outlined by the AA and the annual spend for the average household reaches €49,098. Net.

And that is a figure that most people would accept they would be very fortunate to earn.