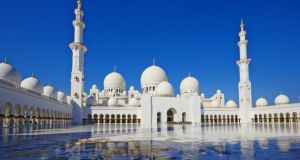 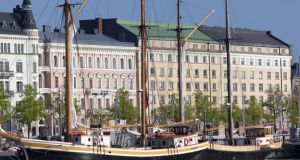 Abu Dhabi Do
As Etihad Airlines gets ready to begin its twice-daily service from Dublin to Abu Dhabi on July 15th (increasing the number of available seats by 40per cent), the tourist authorities in the UAE’s capital city have targeted the Irish market for a new campaign to promote the emirate as a preferred holiday destination. Abu Dhabi welcomed more than 13,000 visitors from Ireland in 2013 – an increase of 12 per cent on 2012 – and 2014 is looking even better: from January to April there were 6,429 arrivals, with an average stay of 4.6 nights (average room rates are €84 a night). The emirate’s biggest draws are good weather, shopping, the Sheikh Zayed Grand Mosque (above) and the entertainment island of Yas, home to Ferrari World, Waterworld and golf courses. From November the largest shopping mall in Abu Dhabi will open to coincide with the Abu Dhabi Formula 1 Grand Prix, also held on Yas. Return fares to Abu Dhabi start at €500.

Campo Regio Relais (Via della Sapienza 25; camporegio.com; singles/ doubles from €150/€190). A stunning boutique hotel with six rooms, each sumptuously decorated in 18th-century style, but with 21st-century mod cons. Breakfast is served on the lovely terrace, from which there are front-row views of the cathedral and the Torre del Mangia.
Hotel Alma Dolmus (Via Camporegio 37; hotelalmadomus.it; rooms from €50). As budget hotels go, this one is a real find: a converted convent (a handful of Dominican nuns still live here) with modern, well-appointed rooms. There is nothing fancy about it, but it is pristine and the views to the old town are sensational.
Pensione Palazzo Ravizza (Pian dei Mantellini 34; palazzoravizza.it; rooms from €100). A Renaissance palazzo that has been a hotel since 1924. The three types of room – standard, superior and deluxe – are all beautifully appointed, with 18th-century antiques.
Villa Sassolini (Largo Moncioni, Località Moncioni; villasassolini.it; room from €200) This 15th-century villa, 20km from Siena, on a wooded hill on the border between Chianti and Valdarno, is one of Tuscany’s most romantic hotels. The original structure of the building has been left intact, but every room is the height of contemporary style. The hotel is 20km north of Siena.
Al Pozzo dei Desideri (Piazza della Cisterna 32, San Gimignano; alpozzodeidesideri.it; double from €80). Tuscany’s other historic beauty is San Gimignano, about 40km northwest of Siena. This relatively new B&B overlooking the main square is the place to stay if you want to soak up the atmosphere, which is best in the evening, when the tourist buses are gone.

Juicy Portugal
Juice retreats are all the rage, it seems, and Portugal the favourite destination for a diet of liquidised fruit and veg. Explore Raw (exploreraw.com) runs week-long luxury bootcamps in a villa outside Faro that include daily workshops, recipe demonstrations and all your liquid meals. The price begins at €625 for accommodation in a tent on the grounds; a room in the villa starts at €1,500. The next retreat is July 12th-19th; flights are not included. Juicing expert Jason Vale runs very popular retreats throughout the summer at Juicy Oasis (juicyoasis.com) in Cernache do Bonjardim, about two hours by car north of Lisbon. The week-long programme includes juices, demonstrations, yoga sessions and full use of the spa. A week costs from €1,500 each, not including flights.

Make mine a trampoline
Snowdonia’s newest tourist attraction is the world’s largest underground trampoline, which will open next month in the Llechwedd Slate Caverns. This is a former slate mine in Blaenau Ffestiniog that already has mine tours and a zip line across the quarry. Zip World (zipworld.co.uk) has installed three large trampolines connected by a 60ft slide, in a cavern twice the size of St Paul’s Cathedral, and lit by a multi-coloured light show. The trampoline opens on July 3rd. An hour of bouncing will cost £15. See bouncebelow.net.

Touchy-feely
Holidaymakers in Tenerife may be greeted by extra- friendly islanders this summer as the Tenerife Tourism Corporation is urging locals and business owners to “go the extra mile and impress visitors with their innate kindness”. The Tenerife Buena Gente (Tenerife Nice People) campaign, launched in collaboration with Ashotel, Tenerife’s hotel association, has created specific courses for its staff and members on how to treat the island’s five million holidaymakers, of which 1.5m come from Britain and Ireland, and ensure that they come back.

Local tours of Reykjavik
Going to Iceland anytime soon? I Heart Reykjavik is a new walking tour of the Icelandic capital aimed at showing visitors the local’s side of the city, including its lesser-known buildings and monuments, street art and where the best places to eat and drink are, far from the tourist crowds.The tours are led by local expert and blogger Audur Osp, last from two to three hours and cost €32 if booked online. See tours.iheartreykjavik.net

Micro-Guide: Helsinki
STAY Hotellli Helka (Pohjoinen Rautatiekatu 23; helka.fi; room from €140). Excellent midrange hotel in the city centre with rooms decorated with Artek furniture.
EAT Kuu (Töölönkatu 27; ravintolakuu.fi; mains around €19). Traditional and contemporary Finnish cuisine.
DO Kotiharjun Sauna (Harjutorinkatu 1; kotiharjunsauna.fi; admission €12). Sweat out your cares in this traditional wood-fired sauna that has been in business since 1928.

Deals of the week
€1399 NORWEGIAN CRUISE FOR TWO PEOPLE: Six-day cruise, from Kirkenes to Bergen in interior stateroom, not including flights from Dublin and pre-cruise overnight in Kirkenes. Departs August 27th; clickandgo.com, tel: 01-6371699