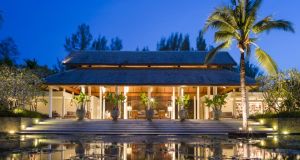 Guests at the Sarojin in Khao Lak, Thailand are being offered the chance to engage with more authentic local experiences during their stay 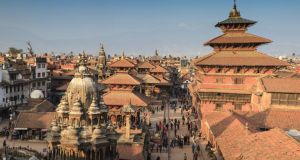 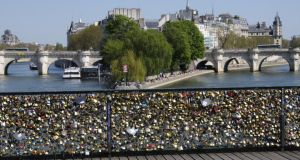 Lovers are asked to take a photo of themselves rather than leave a lock on the Pont des Arts in Paris. Photograph: Getty

Get vaccinated before you travel long haul
The Ebola crisis in West Africa is the most devastating in history of the disease, so far resulting in the deaths of nearly 1,400 people, most of them in Liberia. But the numbers are minimal compared to the threat of malaria: according to the World Health Organisation, there were 207 million malaria cases in 2012 resulting in 627,000 deaths – most of them in sub-Saharan Africa, where a child dies of the disease every minute. And while the threat of malaria is biggest in Africa, it is moderate-to-high-risk in 97 countries worldwide, including Asia, Latin America and to a lesser extent the Middle East. Visitors to any of these countries are advised to take precautions before travelling. The Tropical Medical Bureau (tmb.ie), which operates 22 clinics throughout Ireland, can provide treatment and advice for travel to any part of the world. But the cost can add up. A course of shots and medications for travel to India, for instance (especially if you’re venturing into rural areas), can cost up to €600 as it includes cover against a range of diseases including malaria, diphtheria, meningitis, typhoid, rabies and Japanese B Encephalitis, which is transmitted via mosquito bite and results in more than 50,000 cases a year. The Travel Clinic (summerhillsurgery.org) in Warrenpoint, Co Down charges £565 (€706) for the same treatments.

Day in the Life: Thai immersion
One of Thailand’s luxury boutique resorts, the Sarojin in Khao Lak, about 110km north of Phuket, is offering a new programme of tours aimed at encouraging its largely couples clientele to engage with more authentic local experiences during their holiday. The interactive “Day in the Life of a Local” tours allow guests to shadow a fisherman, a Buddhist monk, an elephant mahout, a fruit farmer or a market seller, as they go about their daily business. The tours cost from €144 per day; double rooms at the hotel start at €160. See sarojin.com

Unlock your love in Paris
Paris has launched a campaign encouraging couples to forsake lovelocks in favour of selfies. The padlock craze, which started in the French capital in 2008, has seen over 700,000 autographed padlocks attached to the city’s various bridges as enduring declarations of love. There were so many on the Pont des Arts that in June a part of the railing collapsed under their weight. City authorities have stopped short of an outright ban and instead want lovestruck couples to take selfies and post them to Twitter using the hashtag #lovewithoutlocks. Giant stickers on the Pont de l’Archeveque behind Notre Dame publicise the campaign and explain the damage the locks are doing, but so far it hasn’t worked as visitors continue to adorn the city’s bridges with locks.

Five things to do in Munich
September 20th sees the start of Oktoberfest, a two-week festival of beer, bratwurst and Bavarian music. Here are five things to do if you need a break from the mayhem.

Augustiner Bräustuben (Landsberger Strasse 19). Bavarian beer is good, and this beer hall inside the Augustiner brewery is the real deal – just don’t sit at the table reserved for the brewers themselves.

Alte Pinakothek (Barerstr 27; pinakothek.de; admission €7). The city’s most important art collection, packed with works from the 14th to 18th centuries. The bulk of them were commissioned or bought by the House of Wittelsbach, who ruled Bavaria from 1180 to 1918.

BMW Welt (bmw-welt.de; admission free). Part of the vast BMW complex in northern Munich (which includes the plant and museum), this is where new owners can pick up their cars and everyone else can ooh and aah over the latest models. Kids get to design their own car in the Junior Campus.

Dachau (Alte-Roemerstrasse 75; kz-gedenkstaette-dachau.de; admission free). No visit to Munich is complete without a pilgrimage to the suburban town of Dachau, site of one of Nazism’s first concentration camps. The museum at the camp’s southern end tells its harrowing story in disturbing detail. Take the S2 suburban train to Dachau.

Residenz (Max-Joseph-Platz 3; residenz-muenchen.de; admission €7). The magnificent palace of the Wittelsbachs is a museum to the splendour of their lifestyle. Try to visit the Schatzkammer, or Treasure Room, with 1250 jewel-encrusted items.

Zagreb in your pocket

Called Zagreb Be There, it also includes suggestions of off-beat sights, such as the award-winning Museum of Broken Relationships – a collection of items and memorabilia detailing failed romance – and the Museum of Street Art, as well as more traditional experiences. The app is free to download for both Apple and Android and users can claim discounts on the price of entrance tickets.

Sligo’s Temple House (hiddenireland.com) is a Georgian house on 1,000 acres that includes a 13th-century lakeside castle that once belonged to the Knights Templar. It has been in the Perceval family for 300 years. Two nights’ B&B, with one dinner and a paddle on Temple House Lake in a Canadian canoe, costs from €265 per person sharing.

The Step House Hotel (stephousehotel.ie) in Borris, Co Carlow is another family-run Georgian house. Two nights with breakfast and one dinner costs from €168 per person sharing.

STAY Kantipur Temple House, Thamel (kantipurtemplehouse.com; doubles US$80-140) Boutique hotel on the edge of the old town. It makes an effort to be eco-friendly.

DO Swayambhunath Temple (admission €1.50) Take a taxi or rickshaw to this 17th-century temple, now a Unesco World Heritage site.