Breathtaking landscapes combine with ancient pueblos and art, burning effigies and a bloody past for an unforgettable trip 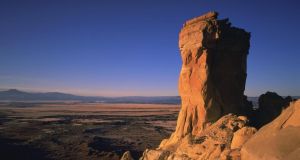 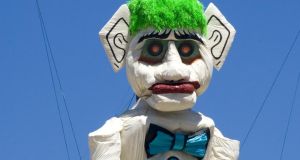 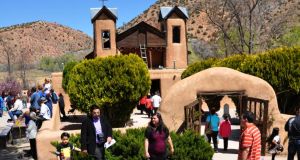 New Mexico, the 47th state in the union, is many things. A land of sun and shadow, of 1,000-year-old pueblos and Wild West towns, of Georgia O’Keeffe vistas and the Santa Fe trail. The Rio Grande is everywhere, turquoise jewellery is everywhere, and all is reflected in a lavish – and expensive – art scene. But the desert is what makes New Mexico unique.

It is the state’s seductive siren. This is not desert as you’ve imagined it, arid and limitless under a broiling sky. The northwestern New Mexican desert is wildly varied, rising as scalding red mountains from high plateaus, rolling out in sandy hills gently spotted with sagebrush or, at a height, covered in forest and wilderness.

New Mexico is a land of many peoples, too: Native Americans, Spanish-Americans, Caucasian Americans, Mexicans, would-be cowboys and New Agers, artists and wannabes, and year-round tourists – all of whom eat chili peppers. Red, green or both together (when they’re called Christmas) there is no escaping chili peppers. They’re on your breakfast plate with coffee and eggs, at lunch with coffee and a burrito, for supper with sizzlin’ fajitas, and at all times in between. Ubiquitous as the sun.

No other state in the union can claim a history so long and unbroken, nor one so replete with the blood, bones and greed that have shaped the southwestern US. It’s a living history, too, seen in soothing adobe architecture, in 19 ancient Native American pueblos across the land, in thriving colonial Hispanic communities, in the timeless beauty of Native American art and in signposts indicating the Santa Fe trail.

The land that is today’s New Mexico has been home to Native Americans for more than 12,000 years. The collapse of that civilisation’s major cities, in the 1200s, led to the foundation of the 19 ancient villages still inhabited today.

The disruption in the 1400s, when the tribes of the Navajo (Dine) and Apache moved in from Colorado, was nothing compared to the affray when the Spanish arrived in the 1600s, claimed the territory and called it New Mexico. Spain ruled for 200 vexatious years, founded La Villa de Santa Fe in 1609, set up a thriving agricultural sector and annihilated those Native Americans who practised their own religion.

The Pueblo Indians revolted in 1680 and, with a cleverly conceived battle strategy, took and held Santa Fe for 12 years. After 1693 the region became more divorced from Spain, subject to Comanche, Apache and Navajo attacks and ineffective against illegal trade along the Santa Fe trail by a newly independent USA. Briefly taken over by their newly independent neighbour, Mexico, Santa Fe was claimed by the US, in August 1846, and New Mexico became part of the union in January 1912.

And none of this is forgotten: New Mexico is every bit as committed as Ireland to keeping its heroes and villains alive, in story, song, myth and monument.

SANTA FE, WHICH claims to be the oldest capital city in the US, sits more than 2km above sea level and is a bit of a tourist trap.

That said, it’s relaxing and wonderful, with rust-coloured adobe buildings and a leafy 400-year-old central plaza. Rigorous height restrictions mean there’s not a skyscraper in sight, just plenty of world-class museums, restaurants and shops selling expensive western gear. Take an evening walk along the tree-lined Alameda river for a peace that is rare in a city.

The Inn of the Turquoise Bear, with its dark beams and shining wooden floors, has a lively history, its former guests in the abandoned good times including DH Lawrence, Georgia O’Keeffe and Igor Stravinsky. Life outside its acre of walled gardens stops daily for a “refreshment hour” that stretches to two or three, depending on the gathering and the gossip. Here, I learn a lot that’s unprintable about the city, and pick up a guide for a few days: Em, a long-time Santa Fe resident.

Chimayó is a Spanish village surrounded by the drama of the red Sangre de Cristo mountains of the high desert. Forty kilometres north of Santa Fe, it’s made famous by its church, El Santuario de Chimayó, to which 300,000 Catholic pilgrims make their way each year.

The desert unfolds in a divine salmon pink and the Santa Fe Opera House appears on its mesa, 11km outside Santa Fe. “Audiences face west, enjoying sunsets and desert-scapes,” says Em. “The stage is open; dress is from jeans to ballgowns.”

She has made the Chimayó pilgrimage many times and points to crosses left on hilltops by pilgrims. “People here say the land embraces them, that they’re never alone.”

Sunday in Chimayó is busy. Local families and tourists pack the walled courtyard as well as the historic, colonial Santuario de Chimayó. Adobe built, it is ornate, with twin towers.

A long queue has formed in a small side room, where healing tierra bendita (holy dirt) from the mountains is being distributed from el pocito (the little well); an entire wall of abandoned crutches bares witness to miracle cures. I join the queue.

There is no cost, although everything else in Chimayó will make up for that: famous weavings, artwork, souvenirs. It’s an extraordinary place, very beautiful and, Em says, the most important Catholic pilgrimage in the US.

By far the best way to approach and leave Taos, pueblo and town, is to take the high road out of Santa Fe and the low road back. Winding and narrow, with scatterings of houses as you climb and coyote fences (as well as being a present-day pest, coyotes are considered a trickster in legend). Forests thicken as you climb, with crosses and monuments appearing at the roadside, and spectacular views as you coast into a high valley of green fields and rivers, trails winding up mountains, dense pines, cloud shadow and 25-degree temperatures.

Taos, the town, is artsy and interesting, a smaller version of Santa Fe, sitting languidly atop a high-desert plateau. Taos pueblo, about 3km further along the road, in the valley of a small tributary of the Rio Grande, is a Unesco World Heritage site, continuously inhabited for 1,000 years and home to 150 members of the Taos tribe.

I am uneasy paying the $16 admission. No matter that it is to observe traditions in a line from prehistoric Anasazi Indian tribes, it still means gawping at people’s homes, back yards and ceremonial centres. A dignified welcome puts me at my ease to enjoy the wonder of the ancient adobe buildings, including a mesmerizing Catholic church.

The low road back to Santa Fe runs alongside the Rio Grande and through swathes of stubby desert, with canyons and purple mountain ranges in the distance. Kayakers coast through the Rio Grande gorge, stoic fly fisherman try their luck and Santa Fe hoves into view too soon.

And so to Georgia O’Keeffe’s home in the high adobe village of Abiquiu, and to the nearby Ghost Ranch where she found the vivid mountain, mesa and desert views that inspired some of her greatest works.

Her studio is a sittingroom equipped for a painter’s needs, with views across the valley. Her bedroom, painted an earthy grey, is restful; her kitchen, with state-of-the-art appliances from the 1940s, is enviable for its space, light and – yes – modernity.

Ghost Ranch, 22.5km further along the road, is where O’Keeffe lived when not in Abiquiu. Visits are not allowed to her home here, but you get a sense of the place, the unrelenting nature of the desert and mountains. An unexpected bonus is meeting Carol Merrill, who worked for O’Keeffe (cataloguing her books) for seven years before the end of her long life in 1986. A gentle woman, Merrill is generous with her time and anecdotes. She is often at the library, often happy to talk.

SUCH PLEASURES are just a taste of what New Mexico has to offer. At Kasha-Katuwe Tent Rocks, 56km south of Santa Fe, prehistoric desert sculptures are the result of volcanic eruptions seven million years ago.

For a Wild West town experience, Madrid (pronounced Madrid) is 40km south of Santa Fe on the Turquoise trail. The town was almost deserted in the late 1970s, when it was rescued as an artists’ community. The film Wild Hogs was made here in 2006. Although overrun by bikers, aficionados of the film and New Agers, it still has a good art scene – notably in the the Johnsons of Madrid Gallery, showing the work of a wide collection of New Mexico artists, including a couple of Irish residents.

If you arrive in Sante Fe in September, you might be lucky enough to catch Zozobra festivities. Iintroduced in 1924, it became part of the older Santa Fe Fiesta, which has been running since 1712. On the opening night of the fiesta, locals gather to send their worries up in flames with the burning of Old Man Gloom, known by his Spanish name Zozobra, a 15m high figure looming in the dark over the gathered crowd.

He is stuffed with the miseries of everyone in town, all of them written and handed in over the weeks leading up to the event. It’s a wild and wonderful evening, allowing Santa Feans face another year worry-free. You too, if you happen to be there.

The Inn of the Turquoise Bear (turquoisebear.com ) Great breakfasts. Doubles $185 (€137)

Where to Go
Visit Museum Hill and the Museum of International Folk Art (internationalfolkart.org). The Museum of Fine Arts (museumofnewmexico.org ) in downtown Santa Fe has more than 20,000 exhibits, including work by Georgia O’Keeffe, Ansel Adams and Elias Rivera.