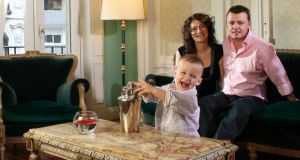 When Belfast man Kieran Rooney heard on the radio that Cardinal Jorge Bergoglio had been elected Pope, he assumed it was a joke. It was only when the car-horns started tooting outside his downtown Buenos Aires hotel that it hit home.

“It was like Argentina had won 10 World Cups all at once,” he said. “Complete strangers were embracing in the street.”

As the city celebrated, Rooney retired to a quiet room to assemble his “Pope Francis pilgrimage package”. Within two hours of the white smoke emanating from the Vatican, the tour was up and running on Rooney’s website, offering a week-long itinerary including visits to the Jesuit seminary where Bergoglio trained, the college where he taught philosophy and psychology for 10 years before he was ordained, and the “villas” (slums) where he carried out pastoral work.

“It just seemed obvious,” says the 39-year-old. “He’s such an inspiring figure. Everyone in Argentina would have been very aware of him, well before now. Even if you didn’t go to Mass, you would have known of him.”

Rooney also reckons Bergoglio’s reputation as a crusader for social justice will win him many new followers – and international pilgrims.

“I think a lot of people will be interested in finding out more about his background,” he says. “Not only devout Catholics, but lax and lapsed Catholics also, who might find their faith rejuvenated under his leadership.”

Rooney’s tour will not, however, be exclusively religious. A lecture in Argentinian politics features, as does a trip to the Malvinas Memorial.

The former archbishop of Buenos Aires has made no secret of his support for the Argentinian territorial claim on the Malvinas/Falkland
Islands.

What does Rooney make of the more serious mutterings, that Pope Francis will have to answer questions about the Argentinian Catholic Church’s relationship with Jorge Videla ’s abusive military dictatorship of the 1970s? “There are unanswered questions,” Rooney muses. “But as the head of the Jesuits in Argentina at that time, Bergoglio would have been in a very difficult position. If you displayed any left-leaning tendencies – and that could simply mean working with the poor – you might be tortured. That’s what happened to the Irish priest, Pat Rice, who I knew personally.

“Bergoglio hasn’t spoken much about that time but he’s a man of few words. It’s not widely known that he went to the house of Jorge Videla and personally pressed for the release of two kidnapped priests. That’s more his style than public condemnations.”

Politics aside, on a purely business level, Rooney’s quick turnaround of the Pope Francis package – which rings in at €970 for tours, accommodation and most meals (excluding flights) – seems a master stroke, but then enterprise would appear to be in his blood.

A qualified chartered accountant with no experience of the hospitality industry, he bought and renovated a baroque townhouse, turning it into a 16-room hotel six years ago with money he made from a previous business, exporting shoes from Argentina to Ireland and Britain.

“You have to be resourceful in Argentina,” he explains. “No one is going to pay your bills. You lose your inhibitions pretty quickly.”

Having left Belfast at 18 to study in England before relocating to Australia, Rooney was travelling around South America in 2000 when he met the woman he was to marry, Gabriela, a solicitor.

He’s been in Buenos Aires ever since and the couple now have two children, Ignacio (six) and Ruairí (four).

He misses Ireland, but finds solace in the thriving expat community. Tomorrow he will proudly don his green strip to represent the national side against Argentina in a hurling game.

“There’s a powerful empathy between Ireland and Argentina,” he says. “Maybe that’s why I feel so at home here.”