Long and winding road ahead of mobile Irish couple

Laura McMorrow and Ciarán Hussey set out to travel 10,000km from Japan by bike 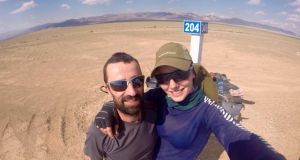 Laura McMorrow, who is originally from Manorhamilton, Co Leitrim, and Ciarán Hussey, from Glenamaddy, Co Galway, have just made it out of Mongolia and into Russia. Photograph: crankandcog.wordpress.com

When Leitrim woman Laura McMorrow and Galway man Ciarán Hussey set out to travel 10,000km from Japan by bike they knew it would be a long, long way from there to here.

McMorrow, who is originally from Manorhamilton, Co Leitrim, and Hussey, from Glenamaddy, Co Galway, have just made it out of Mongolia and into Russia.

Unfortunately, one of the panier’s from Laura’s trusty bicycle didn’t make it to Russia with any love at all. In fact, the bag, which contained her sleeping bag, ground mat and down jacket, just didn’t make it.

Laura took a taxi 60 kilometres back to the customs office to discover that the message about the bag being found had been lost in translation. It’s good to know that even in the middle of nowhere security is taken so seriously - all the bags were put through a scanner, Laura said. But the mystery may never be solved and she faces a chilly start to the Russian leg of the trip.

Their only complaint was that “the Mongolians are too friendly” and they had to battle bravely to provide traditional hospitality for their new and very enthusiastic friends.

‘Living it up in Russia’

The sandy roads slowed them down a bit, too, says Jim, who says reports from Russia say the roads are much better there.

The first stop in Russia was Kosh Agach, which means “last tree”, says Jim, who likes the romantic language. The couple still let him know where they are every day using their satellite tracking system, so his geography has improved significantly, he says.

McMorrow and Hussey managed to update their blog crankandcog.wordpress.com in a yurt village in Bayan Olgii where they could access internet. The long and winding road goes on for the Irish couples’ wi-fi. With its beautiful photographs, taken by the two artists, it’s definitely worth a look.

“Living it up in Russia now! We’ve been stuffing our faces with cheese and cake, Laura dropped to her knees when she saw cheese in the shop, a heavenly apparition in the dairy aisle, it’s been 40 cheeseless days, she really misses cheese,” blogged Hussey.

Jim McMorrow has revised his earlier prediction of October 1st for the couple’s return. He thinks they won’t make it back home until early in November. Laura has plans to stop off with various friends and that might take a while, he says. The pair still let him know where they are every day so he has peace of mind to go along with his new geographical expertise.