Trips for classical music lovers around the world 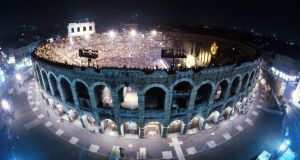 Chipping Campden Music Festival (May 10th-23rd)
Two weeks of quality choral and orchestral music in perhaps the most perfect setting in Britain, the acoustically sublime St James’ Church in the heart of the beautiful Cotswold town. This year, as always, features a collection of international performers. Festival ticket from €180.  campdenmusicfestival.co.uk Fly Aer Lingus (€40) or Ryanair (€19) to Birmingham, 38 miles from Chipping Camden

Dresden Music Festival (May 13th-June 7th)
Artistic director Jan Vogler has shaken up the cultural showcase of the old GDR and given it renewed energy: this year’s theme is ‘Fire Ice,’ as it look to showcase the differences in work by composers from northern and southern Europe. Different climates, landscapes and even light play a part in how music is played and listened to. Tickets from €15. musikfestspiele.com Fly to Berlin with Aer Lingus or Ryanair and take the train (two hours) to Dresden

Verona Opera Festival (June 19th-August 25th)
Europe’s most famous opera festival has been packing them into the Roman amphitheatre since 1913, when performances were held to mark the centenary of Verdi’s birth. The festival has featured the very best of lyric opera ever since and 2015 is no different: the schedule includes works by Verdi (Nabucco, Aida), Puccini (Tosca), Mozart (Don Giovanni) and Rossini (Barber of Seville). Tickets from €20. arena.it Fly Aer Lingus to Verona from €107

Tanglewood Summer Season, Maine (June 20th-August 29th)
The summer home of Boston Symphony Orchestra is the Tanglewood Music Center in Lenox, Maine, where the BSO performs every summer weekend in the open-air Koussevitzky Music Shed, which can accommodate up to 5,000 spectators in seating or on blankets on the grass. The rest of the programme includes weekly performances by the Boston Pops and concerts by popular musicians. Tickets from $20 (€16). bso.org Fly Aer Lingus to Boston or New York; Tanglewood is a two-hour drive from either

Kuhmo Chamber Music Festival, Finland (July 12th-25th)
Up to 40,000 chamber-music junkies get their fix in this tiny Finnish town 600km north of Helsinki on the Russian border, which hosts five performances a day and climaxes in late-night sauna parties, where musicians and music-lovers mingle in the rising steam. There’s no fuss or frills, but the quality of the music is top-notch. Tickets from €17.50. kuhmofestival.fi Fly to Helsinki with Finnair (€179 return; finnair.com) then Helsinki to Kaajani with flybe (€44; flybe.com). Bus from Kaajani (100km)

Salzburg Summer Festival (July 18th-August 30th)
You’ll need to book well in advance if you want to be part of the 250,000 who descend on Mozart’s hometown for 200-odd high-quality productions of opera, drama and classical concerts. One of the main highlights is the staging of Hofmannsthal’s morality play, Jedermann (Everyman) on Domplatz. Tickets €5-€370. salzburgerfestspiele.at FlyRyanair to Salzburg from €50

Puccini Festival, Torre del Lago (July 21st-August 30th)
There is hardly a finer setting for listening to opera: an open-air theatre by a lake, in the shadow of the villa Puccini had built in 1900. A rotating selection of Puccini’s best-known works is on the bill: this year it’s Tosca, Turandot, Madama Butterfly and La Rondine, once a week respectively for the duration. Tickets from €15 to €198. puccinifestival.it Fly to Pisa (18km away) with Ryanair (ryanair.com)

Lucerne Summer Festival (August 14-September 13)
“Humour” is the theme of 2015’s festival, in which “serious” music will be explored for its comic themes: on the programme is Haydn, Mahler, Shostakovich Prokofiev and Stravinsky – as well as a performance of Verdi’s Falstaff. Tickets €16-€200. lucernefestival.ch3 Fly Aer Lingus to Zurich from €95 each way; festival ticket holders get 50 per cent off rail tickets to Lucerne (one hour)

Musique Cordiale International Festival, Var (August 1st-15th)
A series of stunning Provençale hilltop towns play host to this wonderful festival that is celebrating its 11th year in 2015. Seillance, the Pays de Fayence and neighbouring towns of the Var host more than 20 concerts of choral and orchestral work, chamber ensembles, recitals, opera and even some jazz. The atmosphere is informal and incredibly friendly; the music is top-notch. Tickets free-€50. musique-cordiale.com FlyAer Lingus to Nice from €125 each way; one-hour drive from Nice

Bonn Beethovenfest (September 4th-October 4th)
Beethoven’s birthplace (below) celebrates him with 60 concerts in 20-odd venues, usually including a full symphony cycle by a renowned international orchestra. The programme also includes newly commissioned work, to remind us that the great man’s legacy continues to grow. There are also accompanying lectures, exhibitions, workshops and readings. Tickets from €5. beethovenfest.de Fly Ryanair to Cologne from €30 each way; train connection to Bonn