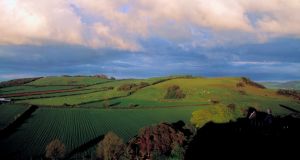 Co Laois has many attractions, but it is not usually well-known for great walking. This rewarding circuit of a couple of glorious hills in the south of the county, in Fitzpatrick territory, makes one wonder how many other hidden gems are to be found in the area. It’s full of history and marvellous landscape and even though there’s little climbing involved, the views all round are stupendous.

Cullahill is a little village on the N8 just over 5km south west of the beautiful Durrow. Nearby are the impressive ruins of Cullahill Castle, built in 1425, the seat of the MacGiollapadriag clan until it was reduced by Cromwellian forces in the 17th century. See if can you spot the Sheela-na-gig high up on its walls. Taking the left turn at the castle, and passing a hedgerow that in season is hung down with wild plums, you will find a small carpark less than 500m further on. This is the start of a Fáilte Ireland Loop Walk.

From the carpark, walk back downhill a short distance and then climb a rustic staircase up through a hazel wood and out onto the bracken-fragrant hill. Nearby is an ancient holy well, a pool of crystal water surrounded by limestone flags where in the old days local people sought cures for troubling ailments. The top of the hill is crowned by a ruined ringfort that may date back to the pre-Christian period.

From here the view of the Slieve Bloom mountains to the north and nearby Cullahill Castle are fabulous in clear weather. In an adjacent field a skirmish took place during which one of the local MacGiollapadraigs was killed by Cromwellian soldiers nearly 400 years ago.

Originally a bush, protected by a stone surround, was planted to commemorate the spot, but today only the circular stone wall remains.

The route continues over the hill in a hilltop promenade through glorious meadows of natural grasses and herbs, full of butterflies in summertime. Soon, Keeper Hill in the Silvermines Mountains comes into view to the west, and further on there is evidence in the coppiced ash trees and box hedges of the good traditional husbandry that was practised in this old and well-established farmland.

As the route swings around the south of the hill Sliabh na mBan, the mountain of the women, the heathery Comeraghs and the regal slopes of the Galty Mountains are visible in clear weather. At the end of a long hedge-bordered side road, the route continues through fields as the county border is crossed.

We enter briefly into a corner of north Co Kilkenny and pass through a quiet, pine needle carpeted coniferous forest before coming out in the open again and re-entering Laois. The route crosses fields and continues along an ancient stone-walled boreen called Boyle’s Lane, from where conical Mount Leinster can be seen to the south east.

We continue through more woods as we circle the steep northern flanks of Cullahill Mountain. In autumn this is a good place for fungi: in particular look out for the white-spotted brilliant red flyagaric, the fairytale mushroom of the cartoons.

Through the trees, glimpse beautiful views of the colourful fields of Laois farmland, before reaching the public road by way of a comfortable grassy lane lined with blackthorn and whitethorn. The carpark from where you started is uphill to the left.

Mind that cat – and its impact on wildlife
9