The former F1 champion’s name has been added to a list of prominent ski accidents, injuries and fatalities, and sparked debated about the risks associated with the sport 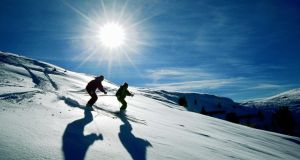 Always popular in central Europe, the enthusiasm for skiing among foreign tourists, including people from Britain and Ireland, has contributed to busier slopes 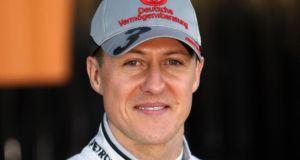 Hours after Michael Schumacher left his chalet last Sunday in the French ski resort of Méribel, the retired Formula One champion was once again front page news – for the wrong reason.

With his 14-year-old son Mick, he joined friends for a morning run down the Saulire peak, almost 3,000 metres above sea level. On their way down, he noticed a friend’s daughter stumble some 20 metres between the “Biche” and “Maudit” pistes, and went after her.

It was just before 11am when the 45-year-old skied over a rock concealed by fresh snow, lost control and fell, smashing the right side of his head against another boulder with such force that his helmet split. Friends rushed to his side and, four minutes later, medical staff were on the scene. On the nearby lift, skiers took pictures on their phones, unaware of just who was lying in the snow. Conscious but confused, blood was pouring from a wound stretching from Schumacher’s right temple to the back of his head.

A helicopter landed at 11.30 to transport Schumacher him hospital, with medics putting him on breathing equipment en route. As surgeons performed an emergency operation on arrival to relieve pressure on his bruised and bleeding brain, news of the accident flashed around the world.

A week on, surrounded by family and friends, Schumacher remains in a critical condition in an artificial coma. At the provisional media camp outside the university clinic, the price on securing the first image of Schumacher’s injured head has reportedly reached seven figures. On Wednesday, journalists dressed as priests were thrown out of the clinic before they could reach the famous patient.

His name has already been added to a list of prominent ski accidents, injuries and fatalities and sparked debate about the risks associated with the winter sport.

Natasha Richardson, the wife of Liam Neeson and a member of the British acting dynasty, was 45 when she hit her head in Canada in March, 2009. She died of brain injuries two days later. Two decades before that in Switzerland, Prince Charles narrowly avoided an avalanche that killed Major Hugh Lindsay, former equerry or officer in the British royal household.

Like Schumacher, Prince Frisio was an experienced skier who ventured off-piste. He was trapped by an avalanche that left him buried for 20 minutes under the snow before he could be recovered.

Sonny Bono, a US politician, singer and ex-husband of Cher, died in January, 1998, in Nevada from injuries sustained after hitting a tree while skiing. A week earlier Robert Kennedy’s son Michael had been killed in a skiing accident in Aspen.

Safer than ever
However the roll call of celebrity skiing deaths contrasts with statistics suggesting that, despite the risks, skiing is safer than ever before. Avalanches, not falls like Michael Schumacher’s, remain the greatest risk to skiers. Sudden snow deluges cause around 60 per cent of deaths in Switzerland where 14 skiers on average die each year on the pistes.

Austria’s skiing toll last season was 27 out of 1,500 accidents. German ski statistics listed 43,000 injuries last season, of which 7 per cent were head injuries.

Since the first statistics were collected 30 years ago, the number of injured German skiers has dropped by more than half. The number of head injuries has dropped by a quarter in the last four years, the German Ski Association (DSV) says, largely to the increased use of helmets.

Meanwhile the rise of new technology – phones and GPS tracking devices – has seen a rapid drop in the crucial recovery time for avalanche victims in Switzerland – the number of which has not increased despite the sport’s growing popularity.

Always popular in central Europe, the rise in popularity of skiing among foreign tourists – including from Britain and Ireland – has contributed to busier slopes. Rising temperatures, meanwhile, means fewer slopes. Topping up slopes with artificial slow can result in accidents among skiers unused to its different texture. Less snow means previously well-buried dangers such as rocks or tree stumps are now often covered by only a thin blanket of snow.

Then there is the revolution in the last decade that has seen a boom in off-piste skiing. “It was always the greatest wish of skiers to experience untouched powder and, with the improved ski equipment, it is easier than before,” says Michael König of the DSV. “But the off-piste dangers – tree stumps and rocks as sharp as knives – are still there.”

Among the equipment innovations was the introduction a decade ago of the “rocker” ski. Resembling the underside of a rocking chair, it enables a skier to skim over a surface with lower risk of snags and at greater speed. That has allowed greater numbers of skiers to go off-piste but, like airbags and seat-belts in cars, innovations in skiing equipment can only reduce risk of injury – not eliminate the risk of accidents or improve human reaction time.

Experts say that leaving prepared slopes, as Schumacher did, is more risky but not automatically reckless. Even off- piste routes are categorised according to avalanche risk. At the time of his accident, Schumacher was in a medium-risk category – with lower risk of avalanche but a higher risk of tree stumps and concealed rocks.

‘Get lessons’
Dublin-based personal injury solicitor Anthony Carmody, who has skied for 10 years, broke his leg on a tree stump four years ago. He blames himself for being fatigued and careless and overlooking a bump in the snow. “The golden rule is, if you can’t ski, don’t ski. Get lessons first,” he says. “There’s a certain amount of bravado and some people have to be seen to be going down difficult runs. They don’t think it is dangerous because they think snow is soft. But ice is hard as concrete.”

Despite the risks associated with off-piste skiing, he doesn’t see any problem in Michael Schumacher’s reported actions between the slopes of Méribel.

“It’s very normal to go between two slopes as he did, particularly if you want to go off-piste to get on to an easier slope,” says Carmody.

As the week wore on, further details of Schumacher’s accident appear to dispel speculation the rally driver had indulged in reckless skiing. “He wasn’t going too fast; it was a normal curve manoeuvre,” said his manager, Sabine Kehm.

French police are now examining Schumacher’s rented skis, according to the Bild tabloid, one of which had a foot binding that may have failed to release.

But German ski experts say they don’t expect any influence on the popular winter sport. “As tragic as it is, Schumacher’s accidents seems to be the result of a series of unfortunate events,” said Michael König of the DSV.